Will Van Persie leave in the summer?

Against the backdrop of Manchester United's beefed-up tilt for a top four finish speculation has been raging about the futures of David de Gea, Angel Di Maria and Radamel Falcao.

Will de Gea stay? Is Di Maria happy enough to stick around next season after a miserable debut campaign in the Premier League?

And just what will United do about Colombian conundrum Falcao as his loan spell enters its final phase?

But there's another United A-lister who could make a surprise exit before any of them – Robin van Persie.

Van Persie's future has flown under the radar, probably aided by his recent absence after picking up an ankle injury in the defeat at Swansea five weeks ago.

The 31-year-old Dutchman is now raring to go again after intensive fitness sessions during the international break.

He's said to have trained ferociously in the last few days – and you can't help but think it's because he has a point to make.

Van Persie's goals single-handedly carried United to their last League title in 2013, but as he chases a new contract maybe he has just as much to prove as Falcao.

On the face of it, you'd imagine Louis van Gaal would be more interested in signing defenders than attackers this summer.

But United have a key decision to make on van Persie as well as Falcao.

Van Persie only has fifteen months left on his deal and would desperately like to end his best days at Old Trafford.

With no hint yet of a new deal for the Holland forward, it's not clear whether United feel quite the same way.

Certainly they aren't as bullish as when Sir Alex Ferguson asked the club's board back in August 2012 to break with protocol and splash £24million on the Arsenal striker who only days earlier had turned 29.

Snatching back the Premier League from Manchester City in van Persie's first season was more than payback for the outlay.

But van Persie's impact on United since that 30-goal first season hasn't been as dramatic – or as consistent.

And that's left many United fans wondering if van Persie – 32 in August - really is worth a new deal.

The World Cup striker has produced a dwindling return since that spectacular debut season scoring 12 times last season in 21 League games and only 10 in 24 Premier League games in the current campaign.

The reliability has gone and with it the feeling that van Persie can ever recapture the golden form that made Ferguson's farewell season so special.

They included victories away at Newcastle and Liverpool as well as a thumping 3-0 Old Trafford triumph over Tottenham with Rooney scoring three times.

There are other compelling factors that make a new contract for van Persie, on a reported £200,000-a-week, more than just a numbers game.

With van Persie sidelined United have looked better balanced and a more potent force with many pundits believing the duo have never formed the best of attacking partnerships.

The Dutchman will always have an eye for goal, but he's not getting any quicker and as the seasons tick by early career injuries may catch him up.

The most he could hope for under United's current over-30s policy is a one year extension.

That may force him to look to MLS in America, even if he does have a couple of years on Steven Gerrard and Frank Lampard.

Before they open the transfer cheque-book, though, they have to decide whether to invest in a new agreement for van Persie.

They could, of course, let van Persie's contract drift into its final year as he has no significant sell-on value.

Hard-line fans, however, would prefer a clean break in the summer and an influx of fresh talent for a title challenge next time round.

A move to Italy would be best for all parties.

Van Persie has been linked with Fenerbahce by Turkish media. 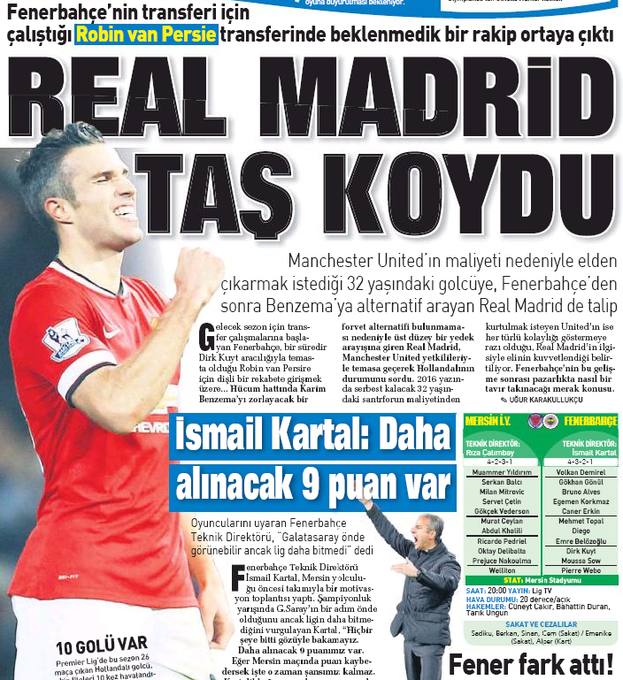 Linked with Juve again too. Read the other day that Galatasaray were looking for investors to fund a move.

That would be a massive waste, especially to that place.

Linked with a move to Lazio. 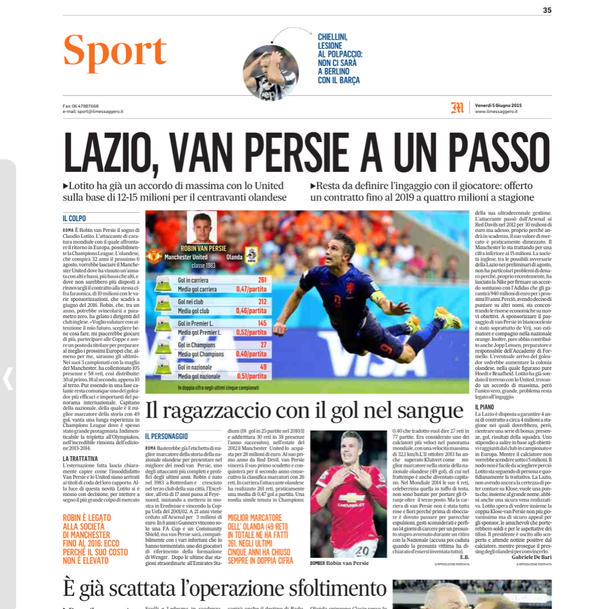 best for all concerned if he leaves. We will get nothing for him if he stays another year & the last 2 have seen a less than adequate return from him. He did his job, he scored the goals that won us the title back but time to move on with Falcao Robin & open the door for Wilson & a new striker

Right time to go, hoped Van Gaal coming in would rejuvenate him but hasn't happened. Arguably hasn't been at it since first half of his first season with us. Need to freshen up our stable of strikers, gone a bit stale upfront, need renewed energy and hunger up there.

Italian stage for Robin Van Persie . The Dutch striker of Manchester United was spotted in Rome in recent hours, a presence that has ignited several market rumors. But he immediately turned off by the two clubs in the capital: both Lazio that Roma , in fact, denied any kind of interest in the striker born in 1983. A situation still being monitored carefully, not be excluded in fact further developments.
Click to expand...

Van Persie talking about Juve today. Seems he and agent are pushing for a move to Italy. Juve were interested when we signed him I believe.
B

JSNFRMN_MUFC said:
Van Persie talking about Juve today. Seems he and agent are pushing for a move to Italy. Juve were interested when we signed him I believe.
Click to expand...

I just hope Utd dont let juve rape them again like they did with Evra & Pogba. If Pogba stays Juve could become Utd old boys with Tevez there as well, although he is rumoured to be going back to Argentina

Great signing. Right time to go though. Good bulk of wages freed up between him, Falcao and Nani. Need to get a striker in. Not seen him but hoping for Lacazette over a Benzema/Cavani/Higuain. Need fresh legs upfront and someone longer term.

Robin Van Persie to Fenerbahçe, we.All set for the big hit of the club turkish market, which is close to close to the Dutch striker of Manchester United:three-year player and about 6.5 million in the coffers of the Red Devils, with Van Persie ready to fly to Istanbul already tomorrow for signature.Fenerbahçe dreams, here after Nani Van Persie: for the arrival of former Arsenal really miss a few details.
Click to expand...

Don't know if this is good for us. Who do we replace him with? Not Harry Kane that's for sure.

Why not Harry Kane?

Don't think he has what it takes to consistently be a 20+ goals striker every season. Didn't show any extraordinary skills to make me believe he is anything other than a one season wonder. Especially at united where there is very little quality of service compared to other teams at the top. Simply put, I don't believe he can win is a game all by himself.

From England to Turkey, it's almost all done for passing van Persie to Fenerbahce. They are underway in England a medical attacker Dutch, having already defined the deal. Once you pass the test, the player is expected to fly to Turkey, perhaps already scheduled departure.Former Arsenal will sign a three-year contract, then begin his new adventure. Away from England this time, van Persie again from Fenerbahce.
Click to expand...

Van Gaal refused to discuss why he had allowed Robin van Persie to leave for Fenerbahce but said he informed the Holland striker at the club’s golf day in May.

“I have said in a [private] conversation with him and we have to keep it like that,” the manager said. “He knows that already from the day we have played golf. After we played golf we talked abut the perspective for him at Manchester United.”

Was it difficult to allow Van Persie to leave? “Every decision is difficult. I go to watch Fenerbahce because of Dirk Kuyt and I am always received in a very warm way and I think he shall like to be in that warm companionship in the club. I wish him all the best and I have also texted that to him.”
Click to expand...