The Reds striker - the subject of a summer bid from the visiting side - was named in the starting line-up under Moyes' management for the first time since the pair were together at Everton, and Rooney responded to the recall with a busy, energetic performance.

"I was very pleased with Wayne's performance and very pleased by the reaction from the crowd," said Moyes. "That wasn't unexpected - I expected it.

"I told him I might only play him for 60 or 70 minutes and see how he was. But he worked back, he tackled and he was great. He closed two or three people down in the corner and the crowd realised the work he did.

"He was desperate to score and nearly scored with an overhead kick in injury time."

The manager added that he feels Rooney, the player he mentored at Goodison Park, is currently in prime condition for United, both mentally and physically.

"He's been great in training and anyone who has looked at him has seen a slightly leaner Wayne. I think Wayne has a positive mind at the moment. I don't think that needs to change. I think his attitude showed a lot tonight."
Click to expand...

Did very well, much happier with his work rate in this game than at Swansea. Some poor decisions and execution in final third. There was one long shot in particular that he took on which I thought he should have played through to van Persie though. Thought he tired and perhaps should have been subbed at around 75 for Kagawa, who may have created something.

Best player on the pitch. Looked like his old self, more of that please Wayne - a joy to watch.
M

As I've posted in MOTM thread. Was that performance for Jose or for us. He needs to come out and say what he wants to do especially after Jose comments last night.

Best player on the pitch, but could tell he wasnt 100% match fit, but that will come and is very encouraging.

macas said:
As I've posted in MOTM thread. Was that performance for Jose or for us. He needs to come out and say what he wants to do especially after Jose comments last night.
Click to expand...

Had same thought but was reserving judgement until the next few games.
R

Best player on the pitch last night, I still think he still needs a few games to get really match fit.
S

The tackle on Ramires made people forget how he provided next nothing going forward. The White Pele chants were amusing.

Thought Vidic and Cleverley played better to be honest. Did play very well though, thought there were a few flaws in his game which let him and the side down, selfish a few times. Also thought he tired in last 20 mins of game and could have been subbed for Kagawa, who probably isn't ready for the season after playing a lot over the summer, not getting much rest or pre-season (which makes me think why is he on the bench in first place, surely better to have an option we can use). 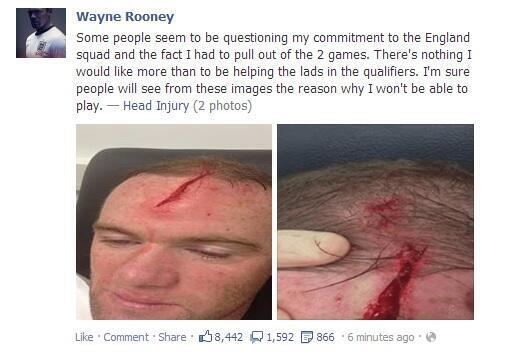 Nasty gash. Seems to be becoming a regular beginning of season occurence these gashes.

Good performance. Touch was iffy at times. Excellent goal. His pass to van Persie was class.
B

Whatever is said about rooney he is a top number 10, certainly the best we have at the club.
M

I'm glad he celebrated his goal. Great goal. Excellent pass for Van Persie shot that hit the crossbar.
B

Still not sure he looked very happy. Though that may be because he looked a bit like Gash out of Rab C Nesbitt.

Good game. Will only get better.

Thought he played well today, and can only get better with minutes played.

Excellent tonight and at times looked like the player from years ago. Kick in the head has done him good

Those chants would have been a lot louder a few years back though.

Excellent again. Arguably our best player of the season so far: impressive cameo against Swansea, our best player against Chelsea and man of the match performances against Palace & Leverkusen.

Easily our best player last night, and probably so far this season as Bob said.

Would probably agree with that, not been much of a challenge mind. Impressive though considering the lack of a pre-season and the more recent gash in his head.

So good to watch in that mood. Was watching an archive game on MUTV this summer from '06/07 and Rooney was running for every ball, at the heart of everything and to be honest I didn't recognize him. The performances this season have been back to that sort of performances, a breath of fresh air to watch and long may it continue.

The other night was the first time in ages that i've seen him run past players with the ball. Almost like old Rooney with the new. Signs of the player he should be.

"I was really impressed with the work Wayne did in pre-season. He is getting the fruits of that. He’s worked hard and is showing everyone exactly what he can do."
Click to expand...

Only player who really looked up for it yesterday. Wasn't at his best but tried his best and wasn't helped by those around him. Cracking free kick.

Have to say I have been very impressed with his attitude so far this season, he has been the stand out player in every game

Worst performance of the season thus far. Touch was poor. He showed experience in the final 10-15 minutes by dropping deeper to create triangles which helped to control possession.

Seemed to happen a lot in first half, poor touch and then Sunderland's high pressing won them the ball. Just said same about him dropping deeper.