Manchester United has reached agreement with PSV Eindhoven and Memphis Depay for the player's transfer, subject to a medical, once the transfer window opens in June.
Click to expand...

Great news. Knows van Gaal well. Knows Blind & RvP, the latter of which praised him a couple months back. Maybe RvP can return to form with Depay out wide supplying him. Depay can play in any of the front 3 positions in the 4-3-3 which seems to be the way forward. Only turned 21 in Feb. Great scoring rate for a predominately winger. Already proven but with bags of potential. Good dead ball taker which we are lacking right now. Pleased if it goes through.

I'm a big fan, saw him for first time at World Cup and was impressed just from cameo appearances. Still has lots to work on mind and don't expect him to be a big success straight away. Certain factors will help him though, knowing the manager and some of the players of course but he'll also be able to go on pre-season tour, something a lot of the signings last summer couldn't do.

Glad we've signed him. Have saw bits and pieces of him this season, he looks far from the finished product but he clearly has a lot of potential. Have heard a few Ronaldo comparisons and they wouldn't be far off the mark - not short on self belief and tries an awful lot of attempts during games. Also seems to be a very hard worker on his self development.

Only thing is that his style of play, taking on so many shots, trying so many incisive passes may contradict the style of play van Gaal has tried to imprint this season of ball possession/rentetion. Di Maria would be a similar type of player in the sense that he shoots/tries a killer pass very frequently with it not coming off a lot of the time - he's found himself on the bench so I'd wonder what sort of chance Depay will have if things don't go well for him early on.

Louis van Gaal has admitted he pushed through Manchester United's move for Memphis Depay because Paris Saint-Germain were closing in on the Dutch star.

The French side were also keen on the exciting prospect but the Reds boss was determined to be reunited with a player who impressed at the World Cup for the Netherlands under his tutelage.

"He's a goalscoring winger and there aren't so many of them in the world," van Gaal revealed to MUTV. "[Lionel] Messi is one of those but now I think we have to talk about the game against Crystal Palace and we have to focus on this and the coming three games. That's more important.

"I was forced to handle [the situation] as a manager because, otherwise, he was going to PSG, that's why I had to sign him and we've done it within one day. But, for us, it's better to focus on the game against Palace."

Although keen to finalise his transfer business quickly, van Gaal reiterated that United's hand was forced on this occasion with three games still to go with the deal set up to be concluded at a later date.

"I want to do this [make signings] early but it's not always possible," he added. "When there's a chance, to you have handle that and manage it directly and that was the case. I want to purchase players after our season and not during the season because it disturbs our concentration for the match."
Click to expand...

22 goals this season now, 7 of which have been free kicks.

BBC say he's flying to Manchester tonight and will undergo a medical tomorrow.

Memphis Depay: Ready for the next step? - Football Oranje

Depay starts against USA. The game is live on MUTV for anyone interested.

Didn't watch it, but sounded like he was the best player on the pitch. 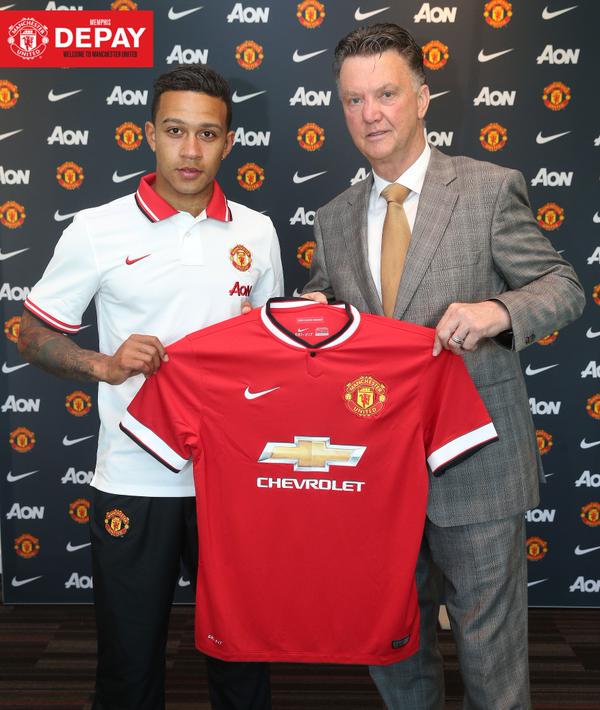 Not sure about "built like a tank" but does have an impressive physique. Lou's a bit vertically challenged though so everyone looks big to him

There was never any fear of PSV Eindhoven receiving any of the bonuses from Memphis Depay's contract this season.

Football Leaks have produced the goods yet again. Shortly after giving us Luis Suarez's contract agreement to Barcelona, the site has leaked the contract for Memphis Depay's transfer from PSV Eindhoven to Manchester United.

Although Memphis didn’t complete his move to United until June 12, 2015, the clubs signed the agreement a full month earlier.

Should they sell Memphis for a profit, the Red Devils agreed to pay PSV up to €5m, or 10% of the uplift.
Click to expand...

Memphis was also entitled to a bonus payments.

Should Man United play Champions League football in any of the next three seasons, Memphis’ basic wage will increase by £1.3m in each an every year they are in the competition.

Man United also agree to a one-off loyalty payment of £500,000 provide Memphis is still at the club in September 2018

Staying with appearances, Man United owe Depay £250,000 after he makes 20 starting appearances in any season under his contract, while another £250,000 is owing if Memphis starts 40 games in a season.

Ballon d’Or provisions were also included in the contract. Memphis will earn £1m if he wins the Ballon d’Or at Man United, £500,000 if he comes in the top three, and £100,000 for every nomination.

Finally, Depay’s bonus scheme relating to success in any of the major competitions in which Man United compete is below.
Click to expand...