he's a pretty good defender actually, not too sure about his passing ability to see him make an impact as a Midfielder. Isn't he considered a better defender than Fornasier or Mcginty?

Not seen enough of Thorpe this season. So many defenders at the club he's not had much of a chance to play until recently. Hope we see more of him between now and May.
S

I think his progress has stalled a little this season

Thorpe lifted the famous trophy last term after starring at centre-back for the Under-18s but has found opportunities limited in that position after moving up a level.

Instead, he has started to make his mark in midfield and, at 19, time is still very much on his side.

"I have an idea about who can play where from how they handle the ball in training," Joyce explained to ManUtd.com. "Tom Thorpe has been a good example of that in terms of how well he's handled playing in midfield in a holding role.

"Tom can deal with the ball, his passing and decision-making is good and you see that in training, in the keep-ball session and other parts of the training. So I got the idea that he can do it.

"He will get opportunities to play at the back as well, it's just that we have an abundance of defenders as you can see. We could quite easily put out two complete back-fours, possibly three, and it's just the make-up of what we have got in the group."

The one new face in the squad this year is Frederic Veseli after switch from Manchester City and the Swiss youngster is another player who can play in a variety of positions. The teenager initially made his bow in a wide midfield role in the win against Bolton as a replacement for Larnell Cole, before reverting to a full-back slot and picking up an injury.

"Veseli is another defensive-minded player who can play centre-half, full-back or as a holding midfielder as well," revealed Joyce.

"He's played in a few positions himself and he's versatile."
Click to expand...

Warren Joyce was pleased with Tom Thorpe's outstanding performance in the Under-21s' 2-1 victory at Newcastle on Monday night.

The skipper opened the scoring with a superb header before Tom Lawrence came off the bench to grab the winner as the Reds leapfrogged the Magpies in the table.

"Tom was excellent throughout the game," Joyce told MUTV. "He prefers playing at the back but we've not got an abundance of midfield players at the minute at this level. It's trying to rotate to fit everyone in the team and we've got two or three centre-halves.

"He certainly put in a shift for the side. He headed it at both ends, put some great tackles in and uses the ball sensibly as well."

Joyce felt the team improved after the break following a disappointing opening 45 minutes in the North East with the sides going in goalless at the interval despite the hosts creating most of the chances.

"I thought we were poor in the first half," he added. "We had several passengers and there were some dull minds - poor decisions with and without the ball, not tracking runners and they could have scored a few goals from our errors.

"I thought the second half was a lot better. We didn't have any passengers, we passed it quite well and put some tackles in which was the catalyst for other people tackling. They're a reasonable side but I thought we were deserved winners."

Welsh youngster Lawrence, who has graduated from last year's Under-18s, can expect more involvement after scoring his third goal of the campaign.

"Tom's unfortunate not to start the games," the coach explained. "He's been as patient as he can be because he's a bit of a snapper! But he can come on and change things and it's pleasing now that he's had a good run of training without any injuries.

"He suffered a lot of injuries last year but I'm sure he will build from that and have a really good second half of the season."
Click to expand...

That is how I described Thorpe's performance in the game thread, although I didn't describe it as excellent. He broke the play up and kept it simple with 5-10 yard passes to keep possession, unlike the rest of our team who were hellbent on giving it away ...

I don't see the Carrick comparison at the moment. Carrick is a rangy passer who is fantastic at the first time 30/40 yard diagonal pass, whereas Thorpe plays much more simple than that in his new role in midfield. I definitely agree with Joyce - Tom's future as a United player is as a CB, no doubt in my mind. When Petrucci comes back, I think we should move Thorpe back to CB with Fornasier leaving the starting lineup (Fornasier hasn't impressed at all this year).

It's great that Tom is Captain already for our u21's and I fully expect him and Michael Keane to have a future in United's first team XI at CB.

I have the opposite opinion. I think Thorpe could struggle as a central defender and has the better chance of making the grade (at United) as a midfielder. He'd be ideal in a 4-3-3 formation, which could be our future formation if a European manager succeeds Fergie. His passing range may not be comparable to Carrick at the moment, but it's something that can develop in time.
L

Sideshow Bob said:
I have the opposite opinion. I think Thorpe could struggle as a central defender and has the better chance of making the grade (at United) as a midfielder. He'd be ideal in a 4-3-3 formation, which could be our future formation if a European manager succeeds Fergie. His passing range may not be comparable to Carrick at the moment, but it's something that can develop in time.
Click to expand...

What aspect of his game do you feel won't translate to CB out of interest? Sure, he needs to bulk up a little like 99% of players his age before playing for the first team, but other than that he has pretty much everything. Most ball playing CB's could play deep in a 4-3-3, so I agree he would be a very good prospect in that role too.

I don't know exactly, it's just a feeling I have from watching him at U18s and reserves/U21s. Maybe his ability in the air is the reason. I seem to remember him being less than convincing - with opponents having free headers and enjoying success against him. The blustery conditions at Carrington could have been a factor.

He's relatively small which is the only thing you could really knock him on as a centre back. I really like Thorpe but he hasn't improved as much as others since coming up from the Academy for whatever reason. Still think he has a good chance of making it though.

Really like Thorpe. If he doesn't make it here, he'll have a great career somewhere and in my opinion make a great captain.

What have you made of Powell's season so far? Where do you see him this time next year?

Really like Thorpe, think he's got a chance of making it. Been excellent in midfield and defence. Just wonder if height may cost him making it as a CB for us, what do you think? Loan next season I hope.

Thorpe has been offered a new contract.

Mr reliable for the U21's, but not sure how he will break through to the 1st team squad

Good leader, versatile, really like him. Perhaps too short to be a Prem CB? I'd like to see him be given a chance at RB for the first team. He needs a loan next season, needs to be tested at a higher level now.

Thorpe unlucky to go on tour? Blackett's left foot probably getting him on the plane ahead of him.

Time to consider his future?

Disappointing result to finish the season today but been a good year, now time to get home for summer☀️ also all the best to Tom Thorpe.
Click to expand...

Probably for the best. It's a shame what has become of that FA Youth Cup side. Johnstone going as well I've heard. Would not surprise me to see Lingard and Will Keane move on either. Leaving only Tyler Blackett from that FAYC winning squad, he may leave too though. 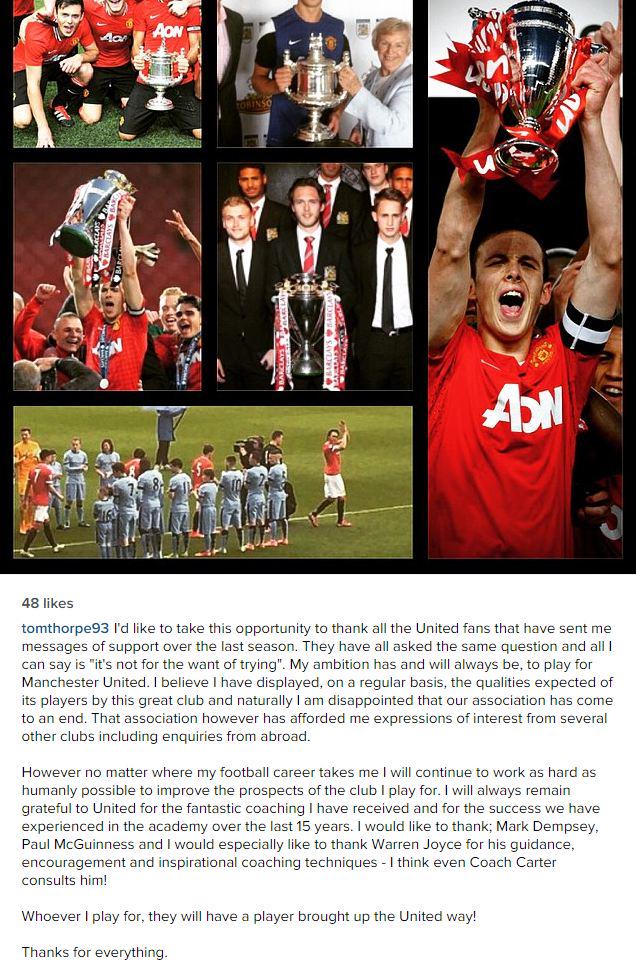 I think it is for the best that he moves on but in terms of professionalism and attitude I don't think anyone deserves to make it more than tom. I wish him the best for the future

Best of luck to him. Should have a great career somewhere.