His lack of pace was alarming when Wilson played him through in the first half.

He will be disappointed not to have scored at least one goal today. His touch and general play was fairly decent.

His movement is excellent. In time, he might start scoring regularly, he doesn't have enough time though and i'm not sure he'll start regularly. It seems like the 2 striker positions are one of Van Persie/Falcao and a quicker player Di Maria/Wilson. Suspect he'll start again next week against Cambridge but Van Persie will be back for Leicester.
S

He seemed to get in the right positions but as with all our strikers we aren't splitting teams open enough for the strikers. How did he do after the Wilson sub? My stream went off straight after and couldn't find another.

Got a lot of stick for his performance against QPR but to me most of that was just from pundits and critics who dislike Utd. He didn't score but I don't think he missed any absolute guilt edged chances, he couldn't have done much more.

His first chance was excellent control to bring the ball down from the air, and Green makes a good save. His header in the second half was placed exactly where it needed to be, but again Green makes a superb save. The chance that looked like a tap-in was actually a brilliant bit of defending. If he doesn't get a nick on it, it's a goal. As it happened the touch takes it a fraction away from Falcao and make it look like he's missed a sitter.

I'm happy with the way he's doing. He's also working his balls off. Problem is three world class strikers into two positions doesn't go so I think one of him and RVP will be gone come the end of the season. I'm torn at the moment as to who I'd choose.

I thought his performance had against QPR had everything but a goal. He has to start scoring if he wants to stay though. He's had a number of goalscoring opportunities this season where i've thought "1-2-3 years ago he's scoring there" and it was the same on Saturday. He needs to play to get it back though maybe.

Seems to me that Van Gaal now sees it as one of Van Persie/Falcao + the pace of Di Maria/Wilson but we'll see. If he starts scoring and can stay fit, he'd definitely be ahead of Van Persie if I was picking the side. I love Van Persie when he's on form, that's not often enough anymore though, Southampton away was probably his best performance since early in his career with us. 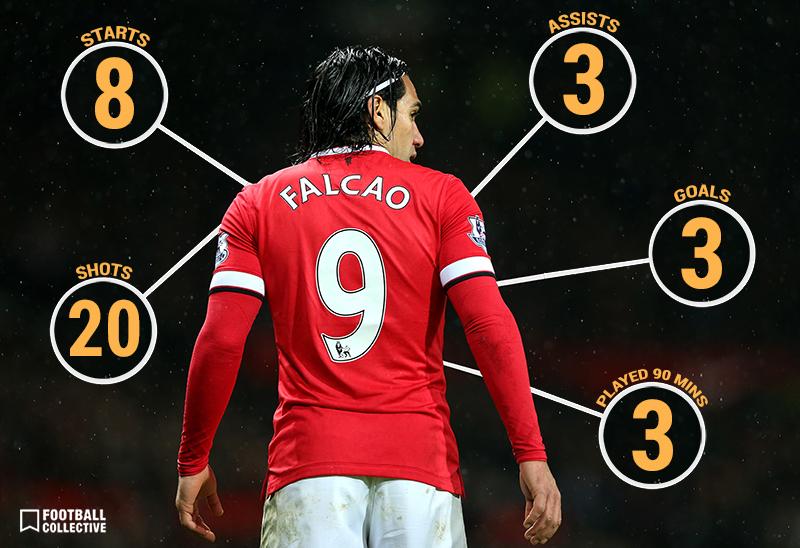 Yeah I think a lot of the criticism he's received has been harsh. He does need a run of games, but if he keeps playing the goals will come. He looks such a threat every time he plays, the formation hasn't helped him. Di Maria playing deeper would help as well.
M

If I was FALCAO I would be wanting to look for another team. His movement is excellent but not one other player apart from Carrick through ball are on the same wavelength. Shearer said it last night.
B

I think inside the penalty area his movement is outstanding. He is not as good outside the area. It seems strange given all the attacking quality we appear to have but I think we need a forward. An all rounder with pace particularly if Rooney is to carry on playing midfield. In fact we lack pace throughout the team

Not sure how to judge Falcao. I saw little of him before this season, but I assume he is not performing to the same level as he was prior to injury. He is slow and his first touch has been inconsistent (which might not be an issue if he is playing with confidence). However, he is not been helped by the system/style of football and the service to the strikers is poor. He will score goals if provided with better service - whether that's with United or his next club.
B

I think many people agree with the issue of service which suggests to me the biggest issue we have in the team is still centre midfield.
S

We're definitely making him look a lot worse than what he is even if he isn't in top form. He's movement around the box is very good but we slow everything down too much especially down the right side. Falcao makes a run and every time Valencia goes nowhere.
B

Valencia is frustrating. He is strong and fast. You would expect him to face the full back up, drop a shoulder and take him on the outside

I thought yesterday was one of his better performances this season. His first touch was good and he brought others into play, however his lack of pace was evident when he was unable to latch onto balls that were slightly overhit.
S

He tries hard but everything looks rushed, he makes Hernandez look composed.

Yeah, you cannot fault his effort.

The Premier League is probably not the league to join after such a serious injury.

Another game where he really should have scored but didn't. Is he getting enough service? Probably not but how many times this season has he missed glorious chances now?

He gets into good positions but it's just not clicking for him. Confidence probably isn't where it was and he does look a yard slower after the injury, trying to rush back for the World Cup couldn't have helped.

He had a stinker of a performance yesterday. Should be sat on the bench. Missed a sitter.

Saw Simon Stone of the BBC say on twitter after the game that despite poor performances, Van Gaal has restored the fight and team spirit that was missing last season. Just seen this on the old twitter too...
[vine]https://vine.co/v/OUXOUliDwMY[/vine]
S

the fight and team spirit? We haven't won a game that we have gone behind in yet.

You don't think there's been more fight in this side than last season though? Not just when behind but when in front too.

Poor tonight like he has been all season. At this rate I don't want him here. Would rather have Wilson starting over him. His first Touch is very poor.
S

Both Hernandez and Welbeck would've been better this season. A gamble that hasn't paid off unfortunately.
B

He was trapping it further than I could kick it tonight

He was dreadful. There is no room in the team for both he and Van Persie, in fact i'd probably rather not have either in the side at the minute.
B

If I had to pick one it would be van persie. Falcao needed to hit the ground running. The only thing he has in his locker better than welbeck is his goalscoring. If he isn't doing that he isn't contributing. Danny ings looked a much better player. Mind you so would Falcao if he was being marked by Evans

What we've seen in the last 2 games though is opposition strikers making our defenders work hard, I don't think that can be said of either of ours. Easy job for opposition defenders, nothing to worry about, everything has to be in to feet with them. One of them on their own upfront with wingers either side may be better for them.
B

Getting rid of welbeck is looking like a bad decision now

Crickey, he was bad.

Time to move on now, I think

No more chances now surely. He's in my opinion our worst strike option now. He was great but it's not happening, time to look a future without him. If not Rooney, play Wilson or Fellaini or just go with Van Persie on his own with 2 wingers either side of him.

Yep, a spot on the bench at best from now until the end of the season, unless his form improves, which doesn't seem likely.

A lot of people saying he's not getting the service, I do agree to an extent, I do think he'd be better with wingers either side of him. But he has had a number of glorious goalscoring opportunities for us and missed.

Just seen we had 30 shots on goal today and 10 on target. Probably the most all season. Falcao just 1 shot (not on target) in 67 mins.

So the question is; poor service or is Falcao not getting in right positions?

Personally thought it was the latter and he was bullied by Wes Brown today and not for the first time this season, think there was a game around xmas time where he was brushed off the ball easily all the time. Physically not up to playing in the Prem. Slow and weak. No real shame in that given the injuries he's had though, not the best time to firstly come to the Prem and secondly come to us. He could go back to Spain next season and be much better.

(Just done some research it was Spurs away, was dispossessed 9 times in that game. Just 3 times today. Averaging the most in the squad. Averaging most bad touches per game too.)
S

I wish he had a chance to bury his shot