So we've had a lot of news so far this week. I'll quickly rundown the big moves that I can remember after catching up on my podcast during a WFH days today.

I like the Rivers move to the Colts. DeAndre Hopkins being let go by the texans is surprising he's a top WR in the league and they've harmed their team. Bills massively overpaid for Diggs. I really like the Austin Hooper trade from Cleveland i'd love to see it all come together for them they've got such a good offensive core their in Chubb, Hunt, OBJ, Landry, Njoku and now Hooper.

Defensively they're fairly sound and a decent side.

At WR Brady is getting a massive upgrade. Mike Evans is one of the best is the league. Godwin is better than anything Brady had to throw at last year. And rumours are they're also in for Antonio Brown. Then at TE he's got OJ Howard and Cameron Brate who are both good reliable receivers too. 5 good options to throw at and a good offensive line should allow him to have some fun.

Their weakest link was their QB. Their running game lacks any spark too. Last year Winston threw 30 interceptions. The highest in the league since 1988. Second was on 21. The lowest was 4. 22 teams threw less than 15. He was a comedy act at times.

You are dealing with someone who knows F all about NLF so what you're saying is they kind of suck but Brady should be able to make them a quite a bit better as he can get more out of what is already there.

We’ll see if last years regression was Father Time catching up with him or just the fact he had no weapons to throw at.

He’s not the quarterback he once was but with the weapons at his disposal and being the best game manager in the business there is a chance of a post-season visit to the playoffs. Something that hasn’t happened in 30 years. Id expect him to be able to put up top 12 QB numbers next year.
R

IDFD said:
DeAndre Hopkins being let go by the texans is surprising he's a top WR in the league and they've harmed their team. Bills massively overpaid for Diggs
Click to expand...

I just can't get over that Hopkins trade. Especially when you look at what Buffalo gave up to get Diggs who isn't as good.

Gronkowski joins Brady at the Bucs!!

The Dolphins attempt to draft their franchise QB with the 5th pick of this years draft.

Drunk last night I decided to rewatch this.


Super Bowl 51. 2017 Falcons vs Patriots. One of my favourite games. A great watch for anyone that wants to relive it or watch a great game and see why people love the sport. 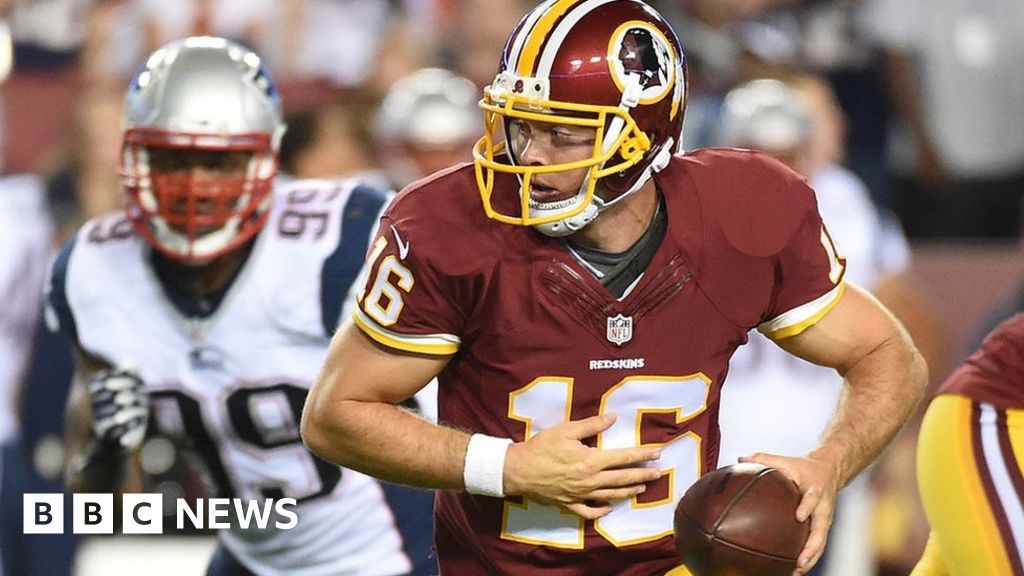 The Washington team's decision follows a wave of calls to scrap the name long-criticised as racist.
www.bbc.co.uk

I'm sure Mr Trump will chip in on this one shortly.

This starts tonight. Chiefs vs Texans

Just had one my biggest NFL acca come in. 9 teams, £397 from a fiver. Buttker is clutch.
R

IDFD said:
Just had one my biggest NFL acca come in. 9 teams, £397 from a fiver. Buttker is clutch.
Click to expand...

Great stuff bud! Really really top stuff. That's tricky to do early in the season too.

Was a little nervous watching Buttker take that last kick after not taking the £290 cash out offered!
R

IDFD said:
Was a little nervous watching Buttker take that last kick after not taking the £290 cash out offered!
Click to expand...

I bet! But hey it all worked out for you buddy.

Ok guys, and @IDFD who looks like he bets on the NFL....
I do the footy acca's and never win many of them to be honest, even with just 3 teams all being at home and favorites one always messes up (please don't mention Utd at the weekend lol, had Arsenal, Utd and Leicester to win and guess what...)

Anyway, it's clear to me that Premiership is just too much of a lottery, the mid and bottom teams are never predictable enough. My mate says that a massively high percent of the favourite NFL team win and he has been winning a fair bit on them. Granted he says the odds are low so he has to go 4 maybe 5 games but they are coming in. Can you guys fill me in on this one?

NFL is slightly different as a lot of people bet on the spread rather than whose going to win. First few weeks are generally finding your feet and where everyone is at and there’ll certainly be a few upsets. I do one weekly bet and usually miss by one just like the football. I like to mix up the spread and the money line. Last nights bet was

As with anything including that many teams you’re going to need a little bit of luck.

It's the same as the handicap in football. I had Green Bay starting 6 behind and Ram's starting 1.5 ahead.
B

Aldon has always had the talent so its nice to see that despite being out of football for a long period of time, he is still able to play at a high level via 1xbet apk

The Dolphins and Tua are rolling. That was a massive win over Arizona. 4 straight wins and now we've got 4 winnable games in a row.

Whisper it quietly but the Dolphins are a part of the playoff conversation.

Miami Dolphins move to 6-3. Beat Denver next week and we move level with Bills at the top of the division.

Cardinals did us a favour with a last second hail Mary against The Bills. (Posted below. 4 behind. 11 seconds on the clock and snapping the ball at the 43.)

Don't think we've ever been 6-3 since I've been watching.

Surprised anyone admits to following the Dolphins...
...winning seasons don’t come around too often
Days of Shula and Marino long gone.

Those days were a long time before me too. I've been following the Dolphins for about 8 years. The only time I've got to see us live we put up 0 points.

However things are pointing in the right direction for us. We are building a good defence. We've got Tua. We've got Texans first and second round picks next season and the Patriots look like they've got a lot of rebuilding to do.
L

Only kidding you about Miami...
...still one of the marquee franchises of the NFL, with a big UK following.
Even if before your time you must be aware of the great Don Shula and Dan Marino?...
...and the Marks Brothers (Mark Clayton and Mark Duper), Marino’s great pair of wide receivers?

Ahhh yeah I know if them. Just saying I never got to experience anything like a glory season. Winning seasons were long before my time is what I meant.

The 10-6 2016 season and losing in the wild card game is the closest I've got. Which is why this start has got me so excited for what next season and the near future could bring. Flores has the team in a good harmony.

I never intended to like the Dolphins when I started watching NFL. I've been a Pittsburgh Penguins fan since 2004 and when I got in to NFL in 2010 I naturally thought I'd follow the Steelers. But even with them winning games and the Dolphins losing I was getting annoyed that the Dolphins had lost games and didn't care for the Steelers results so they were the team I found myself rooting for. I tried to give the Steelers a go because of the Penguins but they weren't the team for me.

Do you support anyone? (And please don't say New England haha)
L

Good for you...
...it is a great feeling sensing things are going in the right direction and future years look bright.
You can see the pieces being put in place, bit by bit.
You clearly weren’t meant to be a Steeler.
Just guessing, but l think you might find the elation of a SB win comparable to a CL win.
It’s special...

I live in hope that under Tua I get to find out!

For now I'd take the feeling of a playoff win!
R

losblancos said:
Only kidding you about Miami...
...still one of the marquee franchises of the NFL, with a big UK following.
Even if before your time you must be aware of the great Don Shula and Dan Marino?...
...and the Marks Brothers (Mark Clayton and Mark Duper), Marino’s great pair of wide receivers?
Click to expand...

Yeah the Dolphins are one of the great franchises, good to see them becoming relevant again. The NFL is great at the moment, so competitive and a golden era of young Quarterbacks.

Last night I had Metcalfe first TD scorer and Seahawks to win between 7-12. 40/1

Seahawks are doing me good at the moment.
R

IDFD said:
Last night I had Metcalfe first TD scorer and Seahawks to win between 7-12. 40/1

Seahawks are doing me good at the moment.
Click to expand...

If Seahawks defence was better they'd be my pick for the Superbowl, they'll not win the big one with that D though. Still the Chiefs Superbowl for me this year, Saints to be in the hunt as well if Brees recovers ok.

Brady moves ahead in the GOAT race, Montana and Manning trailing in his wake.

Mahommes kept at it. Man has enough courage to compliment his amazing skill. If his receivers had their catching mitts on, it would've been a better contest. Maybe this loss will make him realise he needs to be an on-field general, a leader, and not just the most talented guy out there.
R

O-Dog said:
Brady moves ahead in the GOAT race, Montana and Manning trailing in his wake.

Mahommes kept at it. Man has enough courage to compliment his amazing skill. If his receivers had their catching mitts on, it would've been a better contest. Maybe this loss will make him realise he needs to be an on-field general, a leader, and not just the most talented guy out there.
Click to expand...

Brady is unreal, starting to think he's not even human lol. It was a pity that the Chiefs were missing those 2 OTs it gave Mahomes no time in the pocket and he'd no chance against that Buccs pass rush, would have made it a higher scoring affair. Both teams will be in the hunt again next season imo. Really gonna miss the NFL during the off season, its been another great season.
Share:
Facebook Twitter Reddit WhatsApp Email Share Link