Martial to leave in January?

Been a while since we had something to celebrate, put the flags up... Hurraaayyy

Good riddance he's gone backwards in the last 18 months and needs to be moved on ASAP.

He's got some ability but mentally he's nowhere near the elite level the huge drops in form and flashes of briliance are not the marks of a top player.

unless he takes a drop in wages I doubt anyone would be stupid enough. There's always Spurs, or Newcastle

He's got 2.5 years on his contract plus an extra 1 year option and he's just turned 26 years old reported salary is £13m a year or £250k a week I assume that's before tax. Think he's the 5th highest earner behind Ronaldo, De Gea, Varane and Pogba.

Utd will probably want a reasonable fee for him too but it's a small number of clubs that could potentially match his wages and pay that transfer fee which is a problem.

Most PL clubs could afford him and the wages but not sure how many would be willing to part with the cash and would Martial consider a club like Newcastle? Is he even better than Callum Wilson?

I think best case in January is a loan move then even next season could be another loan move before he eventually moves on.

If he's desperate to move then he might need to walk away from some money but sadly that just isn't how it works so his agent will probably expect Utd to take a lower transfer fee.

Just never lived up to the hype this lad got messed around a bit under Mourinho looked like he was coming good under Ole but faded away again.

Best move for him would probably be the route Depay took when he left took a step back down to join Lyon and rebuilt his reputation in a decent side in France before getting another shot at a big club in Barcelona. I think Martial needs to look to that route.

I think Tottenham would look at him they lack severe quality in the front third.
H

So your calling Martial severe quality?
You must have a good memory
R

United should immediately find a buyer and be done with him. He's got the ability but he rarely shows it. And if United are to embrace this pressing style then he has no place in their team anyway.

"I don't communicate with agents via the media and press," Rangnick said. "The player hasn't spoken with me or us about it.

Think Rangnick hits all the right notes with his comments about players he had a little pop at those who say they want to leave before the weekends game and he was asked about Martial today and have this response.

If the player wants to leave they should come and tell the manager or board themselves not send your agent off to the press to give statements on your behalf.

Atletico Madrid rumours to be interested but deal would likely be structured around swaps rather than a transfer fee.

I mean Martial doesn't strike me as the sort of guy who's going to get on well with Simeone.

There was obviously the links to Trippier over the summer and there's been rumours of interest in Jaoa Felix can see some of the logic in Trippier but at his age how up and down can he still be and Felix would fit into the system but does feel we've got a fair few of his type already at the club.

I'd take Griezmann but I think he's only there on loan

Think it's a done deal they have to buy him at the end of this season no matter what.

I don't follow the Spanish league at all but from what I hear he's not been that great since going back.

I don't think the team are doing well are they, might be time to move on from Simeone

I dunno it's a tough one as he has kind of evolved the team during his time there but not every big transfer comes off and until recently he's been up against two almost unstoppable forces.

Madrid have really got their act together this season and are running away with it whereas Atletico just haven't really got going. I think they got off to a real flyer last season and kind of held on a bit at the end maybe this season is just the hangover of that.

You do kind of have to question the logic of bringing Griezmann back he was a great player for them but he isn't the player he was when he left for Barca a few seasons ago.

I thought he was superb at the Euro's

Looked up his stats in the league he's 12 games 3 goals but in Europe he's 5 games 4 goals.

Again he'd be a player that should fit the current system but I bet he's on enormous wages.

He's 31 in March I think Utd need to be looked towards the next generation of players rather than the past especially if we want to become one of these hyper pressing teams. Griezmann certainly has that sort of character he's a real team player but not sure how many more years of that he will have in the legs.

So the deal with Barca is a loan deal which can be extended by another year if they want but either this summer or the following summer they have to buy him for 40m euro.

As he played for Barca at the start of the season not sure if he could even join Utd until the summer and if he came in January he'd be cup tied in Europe.

Griezmann for me is a guy we should have got when Rooney finally called it a day but despite a lot of flirting it didn't really feel like he ever wanted to come. 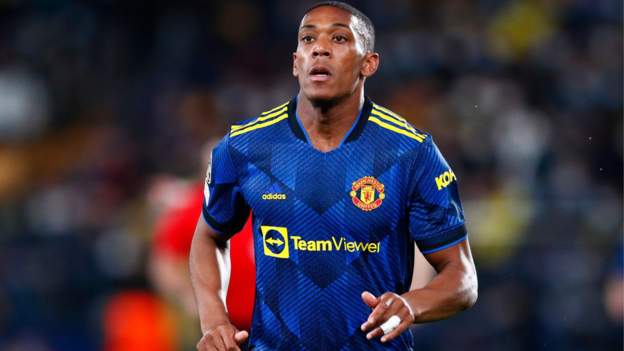 Smacks to me that Martial knows he's a pretty lazy player and that isn't going to work in this style. He's a talented player but he's never found consistency and he's struggled with injuries.

He needs to go somewhere where he can be the star man. He can be the main attacking player and the team is built around him. A team where he can do what he wants to do on the field without having to track back etc.

RichH2016 said:
Smacks to me that Martial knows he's a pretty lazy player and that isn't going to work in this style. He's a talented player but he's never found consistency and he's struggled with injuries.

He needs to go somewhere where he can be the star man. He can be the main attacking player and the team is built around him. A team where he can do what he wants to do on the field without having to track back etc.
Click to expand...

He’s going to be playing for someone like Metz then.
R

Or Sevilla or Newcastle yeah.

I like to Rangnick has made him come and speak to him.

Martial needs to leave if he wants to be a successful player if he just wanted cash he’d hang around at Utd on his mega wages. The true test of his intentions will be when it comes time to leave in the summer is he willing to leave money on the table to take the right move?

Was a very talented kid but when I’ve seen him play in the last 18 months he’s never looked fully fit looks like he’s lost a bit of his speed.

This new system could really suit him playing in a front two rather than being pulled wide all the time.

Time to move him on, but it's so friggin frustrating, his performance as a reluctant CF away to City the season before last was the best i've seen for hold-up play since Sparky was in his pomp, and he's got all the ability in the world but he just doesn't seem to want it enough, it happens.

Sevilla is taking the piss.

Not sure they are Martial is probably paid four times what most of their players earn.

His wages are £200k a week shifting him is going to be a massive problem.

If Utd can get them to pay most of the wages I think it’s a good deal but incentivise them to play him if he starts you only pay 50% if he doesn’t you pay 100%. We need this lad to go on loan and play well just like Lingard did so we can attract buyers in the summer.

Martial is going to have to take a pay cut to if he wants to play football regularly as the clubs that would likely play him can’t pay him anywhere near what we do.

“He made it very clear that he wants to leave and, in a way, I can understand his wish to leave and to try to play more regularly somewhere else," Rangnick said. "But, again, it's a question not only of what he wants to do but it's also a question of which kind of clubs are interested in him and do they meet the demands of the club, so we have to wait and see.

"He is not injured currently so I decided to go for this group of players that were in the squad today, so it had nothing to do with injuries."

Looks like he’s played his last game at the club for a while.

Barca apparently interested in a loan deal but they need to get others out to bring down the wage bill hard to see that one happening.

The demands relating to the loan apparently is a 5m loan fee and wages paid in full.

Sounds like a loan deal with Sevilla has hit the buffers they can't pay his wages and a loan fee.

Ralf said Martial refused to play/be in the squad which if true is so disrespectful to a club that is paying his wages.

However, he has then come out on Insta saying he would never refuse to play for us.

The club is still a mess.

I know who I believe.

Apparently he doesn't want to go on loan to another English club.

According to reports Barca/Sevilla/Juve are all interested but none are willing to meet Utd's terms of 100% salary plus loan fee.

A lot of news going today suggesting it's pretty much a done deal Martial even reporting to be taking a bit of a pay cut to get the deal through.