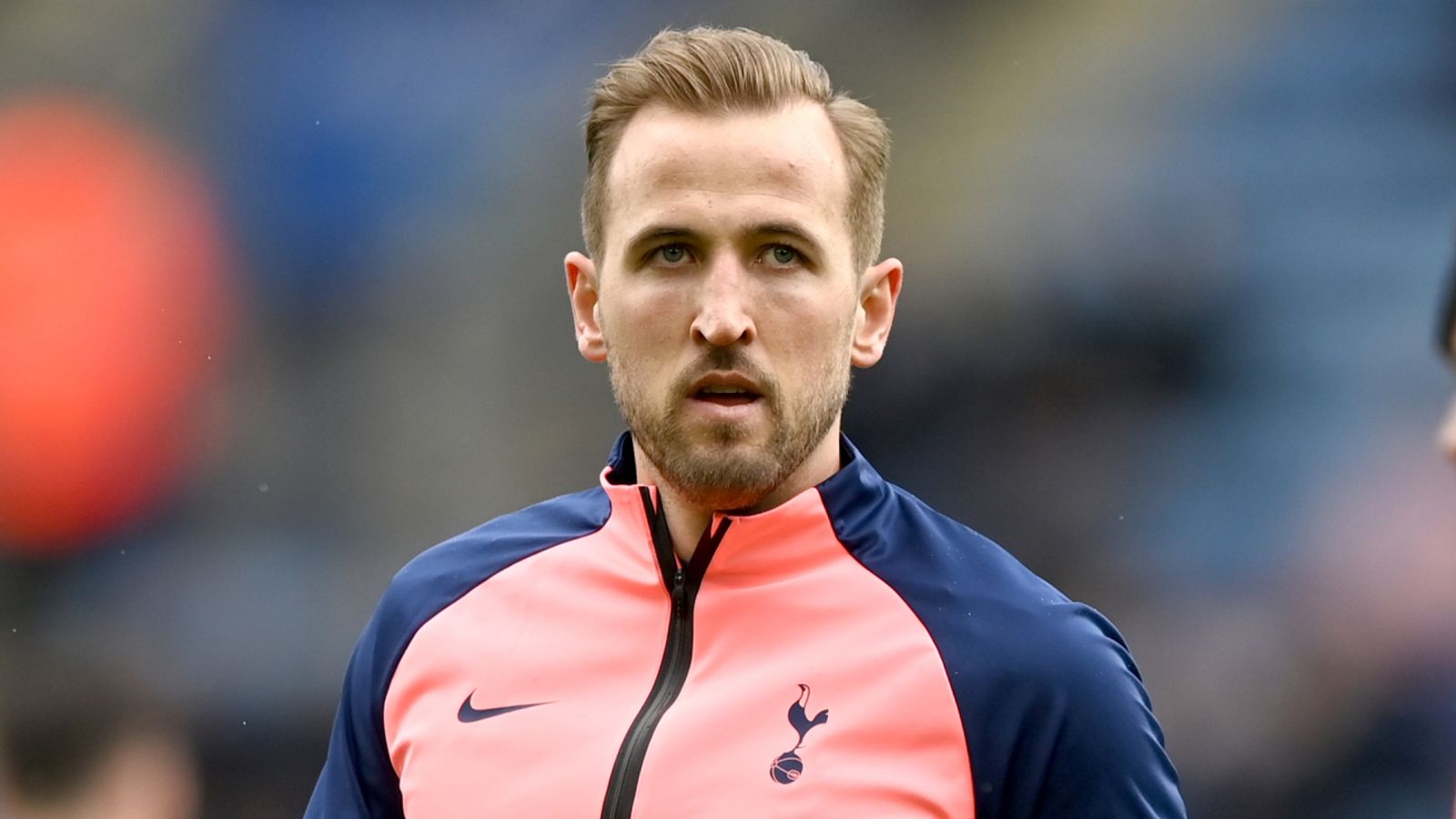 Harry Kane: Tottenham striker does not show up to pre-season training amid Man City transfer interest

Harry Kane not present at Tottenham's pre-season training on Monday; Kane told Spurs in May he wanted to leave the club this summer; Manchester City made a £100m bid for England captain at end of June

Harry Kane looks like he's holding out for a move. Supposed to return to training today and hadn't shown up.

Yeah I didn’t think so either. However, if he has got this gentlemen’s agreement and then Levy says actually nah sorry Harry, then I can understand why he would be peed off.

You would imagine if he was to leave then it’s City or nowhere, don’t think we would be in for him nor any of the other leading clubs. I guess you never know though, if he was to become on the market then there could be a scramble.

Guess it depends on what the agreement was.

It does feel like City or bust the only other club I guess that could get a big offer together would be PSG for a reunion with Poch but not sure if that would interest him I think he wants to go for that PL goalscorer record.

Talk of a fine for not returning totraining.

City not willing to meet the Spurs asking price of 150m

I didn't think he'd missed training, I read it was a Covid test

He was due to report for his Covid test today and didn’t show up.

Had to do a test today to allow him to join the group for training tomorrow.

Oh, that's bad, even if he wants to leave he should still be professional

And he's taken a second day off.

rumoured to be going back at the weekend.

Getting a very easy ride from the press over his behaviour.

Is he putting his England captaincy at risk by not returning to training? He's supposed to set the example in that England squad and what he's doing isn't exactly the most professional way of trying to force a move.

This is such a surprise to me, he strikes me as a proper pro. I wonder if there is more to this. Spurs trying to paint him as a wrong un.

Wouldn't surprise me if they've kind of agreed to do it this way for Kane to go he needs to leave as the "bad guy" so that it doesn't bring to much heat on the owner, Levy, sporting director and Nuno.

Kane has a contract, Nuno wants him to see it out and build the team around him. No sympathy for Kane.

The contract is as much there to protect the club as it is the player. The contract means they get a decent fee for him not that they hold him there against his will. Ronaldo signed a 6 year contract with us 6 months before leaving so that we got top price for him.

The club set the fee, I've no sympathy for him either. If city want him, pay the fee. Stop mucking around and unsettling him and spurs.

Levy needs to do a Dortmund, state the fee, state a date, if they don't get the money by then he stays

I don't think City have messed around? They made a £100m bid it got rejected and they haven't come back in. It's not like they're talking about him in the press.

You'd think Kane wasn't bunking off unless there was contact

Could just be a come and get me plea? Kane:

- Stated he wanted to leave in May and wants it done before the euros
- Says he got an agreement with Levy in place to let him leave this summer as he said he'd do one more year.
- Knows City bid £100m and it was straight out rejected with no negotiation.

Spurs want 150m, what's the point in offering 100m? If someone offered 50m less than we want for Pogba are we going to respond?

It's wasting everyones time. It's going to take at least 130m to get him. Everyone knows it.

I haven't seen anywhere Kane saying there was a gentlemans agreement. Isn't it speculation so far?

Could say the same with us and Sancho last year we were told that it'll be £112m and kept bidding £70m. As JSP says all the time if you're buying a house/car you don't just go straight in with a bid for the asking price you low ball them a bit to see where the wiggle room is.

Kane's representatives leaked it in May that they believe they have a gentleman's agreement to leave. And then Kane did the interview with Neville where he said he wants it all sorted before the euros.

At the end of the day if you're City you'd be silly bidding £150m as each day Kane doesn't turn up for training his value is diminishing.

Lets not forget, us as united fans were fed up with Man Utd wasting everyones time. We all knew that deal wouldn't happen at that price. And Sancho didn't go missing. It's not exactly a case to bring in defence of what's going on here. The deal didn't happen and the player was undettled for a few months.

Can you imagine the UK press if Pogba behaved like Kane.

City are are way off the Spurs valuation, so stop unsettling their player, bid the money nearer the price or go away. Talk to spurs, give then your top price, if it's no good let Kane know and everyone can carry on.

As for Kane, like I say, I have seen no one say there was a gentlemans agreement. Even if there was, Kanes reps should have known better of Levy. And he may say he wants to leave in an interview with Neville. But it seems only one club is interested and they don't value him the same his club do. City shouldn't be allowed to bully a club by getting a player to go on strike.

There is no excuse to behave the way Kane is. I am truly amazed as I thought he was a decent pro.

Should he just stay at Spurs? I think you've got to look at it from both sides. Yes Spurs are annoyed but if you're Kane and you've been promised a move if you don't win anything this year and you see the club going backwards of course you'll be annoyed. Whose left from the team that challenged Leicester/Chelsea for the title?

Modric, Bale and Berbatov all had to do the same thing at Spurs after a year of waiting for a move and Levy refusing to let them go.

People mention the fact he's got a 6 year contract but as I said that is to protect the club and allow a transfer fee. Imagine the uproar if he didn't sign a new deal and walked on a free last summer?

Personally, I've got more respect for Pogba leaving on a free than what Kane is doing.

Let the club you know you want to go, if they don't sell you move on a free. But carry on turning up and putting in the effort

Why sign a 6 year deal ffs, especailly when you had 3 years left on your deal. He wanted to secure his long term future, that was his gamble and it didn't pay off for him.

Dortmund want 150m for Haaland, so you've got say a proven player like Kane should be the same.

That's the price, so pay it or near enough, or move on. Don't get other teams players to walk out.

No he shouldn't just stay at Spurs, but Levy shouldn't be bullied into selling him cheap just because he's decided he wants to leave.

Modric, Bale and Berbatov, all those players got bought for what Levy said he wanted, or pretty close to.

If he turned up to training like a pro I might have sympathy. Now I hope Levy screws everyone.

I don’t think his value is diminishing football fans are very forgiving to good players if the move doesn’t happen might be a bit of booing at the first game then everyone moves on like there was for Ronaldo at the start of 08-09. All that stuff with Messi last summer serving legal papers on the club to try to terminate his deal and leave on a free all very quickly forgotten when the goals start flying in again.

We don’t know what this agreement is with Spurs so it’s not really correct to speculate on it.

I think by not returning on time Kane is making it quite clear that he’s not happy with the situation and feels betrayed. I personally don’t think he should do what he’s done but that’s his decision and again we don’t know the details of what was promised in terms of him being allowed to leave. Is this now 2 or 3 seasons with no CL football at Spurs?

Kane committed his career to Spurs at a time where they were challenging in PL and CL to a certain degree since then the club has gone backwards fast. He’s now on his 3rd manager in 3 season and he can see the squad is getting weaker and weaker so he wants out. I think he was a bit silly signing a 6 year deal and he probably regrets that now 4 would have been more than enough.

I think Spurs have to be fair to his wishes and be open to negotiation as IDFD said the contract protects both parties if the player wants to leave the club have a duty to request a fair and reasonable fee. £100m for a 28 year old striker is huge money I think maybe they can go a little higher with what they ask but if City are getting up to £120-130m they surely have to accept?

yeah I think 125 the deal gets done. Alhough after the first game of the season.

If I was Spurs I’d only do the deal on deadline day don’t let City have him for pre season and first few rounds of fixture just let him train but don’t play him the old fake back injury line.

I mean even 100m should be enough a new British record Griezmann moved at 28 for around 110m so I guess that’s your kind of benchmark for a deal.

I’m just surprised City are suddenly flexing their muscles in this way it’s not really been their style in recent seasons to buy within the league. Walker, Stones and Mahrez all came on big fees but they backed out on Maguire in 2019 now it seems they’re prepared to go big to land top domestic talent.

The talk is it isn’t Grealish or Kane it is both and they think they’ll get it done which is a big message to the rest of the league about who the top dog is now.

If you do that as Spurs though you ruin your own season. Best to get him out of the door and get your replacement in instead of playing silly games.

I've had no doubt it was Grealish and Kane.

I think the absolute key person to this deal is Levy. He may have said to Kane that he can go but I suspect only if the valuation is met. And Levy isn’t the kind of guy to back down, if he wants £150m then he won’t accept a penny less. I highly doubt the deal will happen in truth.

Like I say, I'm with Levy on this one. If Kane had turned up to work I'd be on his side.

Rumours that Kane is still in the Caribbean.