FIFA looking into making the World Cup every 2 years

Totally against this. FIFA were up in arms at the super league a few weeks ago. Money grabbing @£ses.

Doing a tournament to kill another. It's exactly the same.

I prefer the Euro's too.

I hope not. Part of the beauty of the Olimpics and the world cup is that they're every 4 years. Rare events that make them special when they happen.

They say it’s a feasibility study at this stage.

What happens to the Euros or the African Cup of Nations, etc?

They could play them in odd years rather than even years but then how does the qualifying work?

Truth is the last thing we need right now is more football players are running more than ever if you want a quality product give them more rest not less.

FIFA just want more money which makes no sense as they are a non profit association surely the members won’t vote this through anyway. 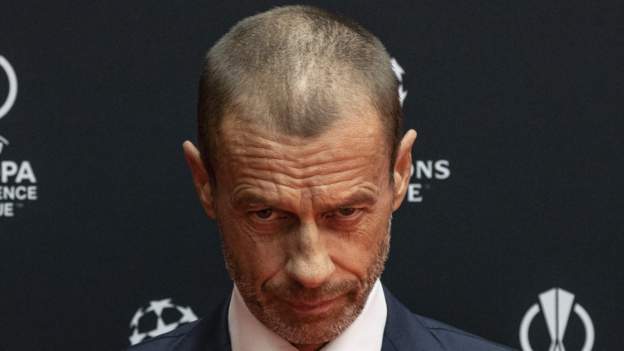 Uefa president Aleksander Ceferin rejects the idea of holding the World Cup every two years, saying it would "dilute" the tournament.

So FIFA are cracking on with their feasability study headed by Arsene Wenger.

Feels like the usual trading between waring factions of football you have FIFA, UEFA and the European Clubs all trying to squeeze in as many games as possible.

One thing I think they should look to consider is review international calenders and have less international breaks but make them longer even go as far as saying have 2 breaks a winter and summer period of 6 weeks where all the international matches get played. It will bump up the quality as teams spend longer together and also the interest as it will be the main focus in football for that period.

I know holding on to traditions can sometimes hold back progress but when it comes to sport I think tradition is important and some things have to remain sacred to me the world cup should stay every 4 years with continental tournaments filling the gap in between.

or just get rid of inernational football. No interest for me really.

I know it's not for everyone especially fans of the big european clubs but I think it's really important for the worldwide game it gives people from any country a potential chance to mix it with the best and it can open up a lot of doors for players.

Also, gives fans of clubs that don't play in European competitions the chance to travel the world following their team, although sadly for England this attracts a lot of knobheads who don't know the dangers of travelling abroad and behaving like an idiot.

It also massively funds the investment in the game across the world without international football there would be no incentive to invest in pitches and facilities in countries because there wouldn't be the local interest. If the power/control sat with the clubs it would quickly becoming a horrible product even worse than that super league idea they came up with.

I've just been annoyed there's been no football for two weeks

There's loads of football on plenty of international matches going on Mr C.

More than usual as they're playing catch up they're all playing 3 games instead of 2, I can tell already that this hasn't sold it to you.

I can't bear these matches, most of the time there is no competition, one team is usually much stronger, you can predict most of the results. It just doesn't interest me. I don't mind the tournaments though

I mean a lot of club football is pretty predictable to generally speaking the big sides beat the little sides all the time but I do agree you don't get the occasional shock. I mean San Marino are never going to fluke a win against one of the big sides in international football. I do think they need to look at that because these games are pointless. How many leagues now are basically won by the same team every season?

World Cup qualifying generally is better than Euro's qualifying as only the top team goes through second goes into a playoff so there's more riding on the games the euro's now is to easy to qualify for when it comes to the big nations.

Also, I just don't have the same feeling towards England as I do United. I'd like the tournament's as much whether England was there or not

I think with England for me they've done great work over the last 3 years since Southgate took over building that bond back with the supporters and also the media. They've kind of broken down that club boundary with a lot of fans who maybe struggled to put their club loyalty to one side when it came to the national side, not going to lie cheering on Gerrard wasn't something I ever particularly wanted to do.

Generally I think that comes down to these current players all seem like good people there's not many who've faced scandal in the tabloids they aren't all perfect but you can sort of connect with them a bit.

How does FIFA think the fans are going to afford to attend every 2 years, coupled with getting a week to three weeks off from work and so on? The World Cup works as a quadrennial celebration because it is special. I went to Russia 2018 and got 3 weeks off from my work and familial obligations. The total cost of my excursion was about $15,000. Who has this time and money to burn? The Premier League will suffer more than others because of the temp of the league and the overly crowded schedule.

I also feel the qualifying campaigns have become ridiculous. There are simply too many matches. Maybe if they did away with all international friendlies that would be a start.

Qualification for a World Cup or Euros is a 10/12 game process over 18 months it isn't that bad.

As for fans well fans who travel with England probably go to world cups and euros or they pick which tournaments they want to go to I'm guessing quite a lot of football fans will be skipping the tournament in Qatar for example.

I think friendlies have a role to play especially for the bigger nations getting in a regular game against a top opponent is useful but I like what they've done with the nations league to give these fixtures a bit more of an edge to them.

To me the best thing to do with international football is to make the breaks longer but have less of them currently I think it's 5 international breaks lasting 2 weeks (not including tournaments) so why not make it 3 breaks lasting 3 weeks. Can fit in 3-4 games in each window and put the friendlies in amongst qualification matches.

Some reports that the idea is very popular within FIFA and will sail through the voting process if it every gets to a vote.

Why wouldn't nations support it as it will boost their incomes.

FIFA really can't accept that international football isn't the be all and end all of the game now in the last 30 years as players have started moving around more creating these european super teams the international game is no longer seen as being the top level of the game and I think that really annoys them.

Report on the Beeb that outside of FIFA, everyone is strongly opposed. Can't see how this can be forced upon the game.

Well FIFA are the world governing body they essentially set the rules and they are made up of the national associations so they can basically do what they want, anyone can create a football tournament.

A World Cup can work every 2 years if all the continental committees agree to stop their own tournaments so no more Euro's, African Cup of Nations, Gold Cup, Asia Cup or Copa America. These tournaments would need to go but why would these continents want to give up their tournament?

The main problem I see is for the teams that maybe can't get to a world cup but can get to a euros it just means these players never play in a major tournament to solve that problem they'd need to make the tournament even bigger which then devalues it.

The end goal here isn't to get a world cup every 2 years it's to dissolve UEFA and get these big european clubs operating under the FIFA name as the real money that can be made is in the club game and creating a version of the club world cup that replaces the champions league.

they don't need to drop those tournaments, one does odd years, one does even.

But it's a stupid idea, there are too many international breaks as it is. Too much football = lower standard of football.

I'd rather watch more international club football if anything

It's just my feeling FIFA want control over the clubs to do that they need to get these other federations out the way and bring it all into their house. My guess is they want a worldwide super league with the top clubs but under their control with them taking a cut of the revenues to then re-distribute amongst the nations.

An international tournament every summer would be madness players just won't bother playing in them.

The players union is pushing for less games due to the strain it's putting on the players.

Think the problem with international club football is not only the travel involved but the top european clubs already have all the top players from the other continents.

Fifa's calendar revamp would "lead to a direct and destructive impact on the club game", says the European Club Association.

Find it really odd that Wenger seems to be the man behind it like he's now got some massive vendeta against the club game he was after all supposed to be the football purist and all round good guy.

It's a money grab by FIFA they make most of their money through a competition that's held every 4 years so now they've decided do it every 2 years and we'll probably double the income even though I can't think of any football fans who want a world cup every 2 years.
Share:
Facebook Twitter Reddit WhatsApp Email Share Link