Manchester United are stepping up their interest in Lazio’s Felipe Anderson after sending chief scout Jim Lawlor to watch him on Sunday.

Anderson, the Brazilian forward, has been added to Louis van Gaal’s list of potential summer targets and scored in front of Lawlor in Lazio’s 2-0 win over Verona.

The 21-year-old only signed a new contract with the Serie A club last week but is understood to figure highly on Van Gaal’s transfer priorities at the end of this season.

Lazio could demand around £30million for the attacker, who is yet to be capped by the Brazil senior team but is attracting attention from many of the top clubs in Europe.

He said: "My story with Lazio is only just beginning. I`m really at home in Rome. Lazio has believed in my potential since the start and even my family is happy."
Click to expand...

United are understood to be interested in signing Felipe Anderson, according to a report in Italian newspaper La Repubblica.

german media reporting a £33m bid has been made.

Can't say much about him. Good age and looked promising last term. Haven't seen much Seria A this season.

The way Cuadrado and Salah have struggled in England shows Seria A Stars are not necessarily good enough for the prem. Lamela has struggled at first too.

Are German media using La Repubblica as the source, red7?

No just according to english media

I'd say not much truth in it

Could mean something, could mean absolutely nothing.

have had a closer look into the comparison with Salah, Gervinho and Cuadrado who played in both leagues. 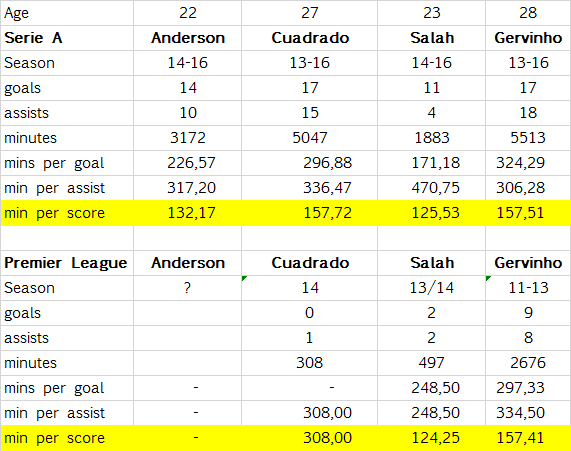 must say Cuadrado and Salah struggled but weren't also given a meaningful amount of game time. Gervinho, despite his bright start in Italy has same figures like at Arsenal.

Anderson is the youngest. From a statistical point of view may be worth a risk.

Why did Salah struggle at Chelsea?

I would say so because he couldn't establish himself in the first team. He managed to get 13 appearances in the league for the club with an average 40 min game time.

You could argue he wasn't really given a go but his time in Fulham can hardly be described as a success.

However, Lazio President Claudio Lotito has revealed he is open to selling the player for around £37m following the winger’s below-par half of the season.

red7 said:
However, Lazio President Claudio Lotito has revealed he is open to selling the player for around £37m following the winger’s below-par half of the season.
Click to expand...

Up until now, the most recent reports on Felipe Anderson to Manchester United had been from the British press and almost certainly inspired by a claim from The Sun a week or so ago. The Italian media love a rumour but they couldn't get anything from Lazio's side to back the idea of a sale up.

Italian newspaper La Repubblica contacted Lazio to ask about British claims of a deal being close, or even done, and they were told it was nonsense. British claims have been covered but with little input from the Italian side, perhaps that's changed on Tuesday.

Gazzetta dello Sport say that Manchester United's final offensive to sign Anderson is 'imminent'. And unlike last summer, when Gazzetta say Manchester United bid almost €50m, Lazio are of a mind to sell. They have accepted that Anderson is perhaps a sacrifice worth making, as long as funds are invested elsewhere.

What has changed things is that it's now early in the window, whereas the €50m summer bid apparently came late, and Anderson isn't having a very good season at all.

It's hard to know what has prompted the Gazzetta article, It could well be assumptions, or it could be that Lazio have decided they're quite keen on the idea of a big chunk of money for Anderson, and so are encouraging the stories, because if not Manchester United... then perhaps someone else will pay a big fee.

Alternatively, this is the real deal. Only time will tell, because Gazzetta make it pretty clear that if Manchester United really want Anderson, he's almost certainly theirs.
Click to expand...

That was written by MEN amomgst the LIVE coverage.

How reliable is sportwitness?

I think Sport Witness is a highbrow version of goal.com. They report on articles in the media and try to separate facts from nonsense.

Looks a tasty prospect. Another for the summer though? Never see these kind of transfers come off in the January window

I'd say if United and the player really want an switch Lazio for United isn't something strange for a January. We are still a massive upgrade for the player and Lazio is on the route to miss european football next term. In addition to that he is not having the season he's had last season (17 games 12 chances created 4 goals 1 assist 68% pass accuracy ). He is suspected to be a one season wonder worth to cash in on as it took him also almost 2 season to get his first goal for the club. £38m for an relatively "unproven" player from a weaker league is a hell lot of money but those are time for such fee's and Lazio knows that too.

Stuart Mathieson of the MEN:

It is understood, however, that there is nothing in the reports that United are set to make an imminent bid for Lazio's Felipe Anderson.
Click to expand...

Looks like an upgrade on Mata. Looks like a versatile player. Very young still hence the lack of consistency. Has a good turn of pace. Wouldn't mind having him.

Felipe Anderson has gone from a starter to a benchwarmer as he prepares to see his Lazio play Fiorentina on the sidelines at the Artemio Franchi stadium in Florence since coach Pioli has decided to bench him after his latest performances. The Brazilian's name is on many people's lips, especially in England where Manchester United made an offer of €40 million plus €10 million in bonuses which Lazio declined on December 27th.

An offer which didn't exactly find President Lotito unprepared who immediately found a replacement for Anderson, namely Santos 20-year old Geuvânio. For the time being, Lazio are putting up a good fight as they are convinced that they can sell Felipe Anderson for a higher sum. His continued stay in the Italian capital could however not be as clear cut as the future could hold new twists and turns. What is clear that the first attempt to land the Brazilian was unsuccessful by Louis van Gaal and his Manchester United.
Click to expand...

So the key question for me: Is his drop off in form due to his head being turned? Or is it a sign that perhaps he's not quite at the standard we should be looking at?

He looks like an exciting player with lots of potential! He's got that ability that gets fans out of their seats. But we have players like that already don't we? Memphis for a start and to an extent Martial (though he's got more of an end product already). Is Anderson really the kind of player to take us to the next level? Or is he more likely another expensive Italian league player who couldn't cut it in England?
B

Personally I don't think we do have many players that get you out of your seat and the ones we do have are very inconsistent at this stage of their progression. Tbh I haven't seen enough of him to know if he is of the required standard but he is definitely the sort of player we need.

He has had one good season (better say half a season because most of his goals and assist came from a 3 months period) and was crap before and average afterwards. I doubt he is the solution and say we should look elsewhere

There's no way I can see this being true...

That's a huge figure for a guy who's not in the top 10 maybe even 20 in the world. In a league where you get mixed results when they move to England. He looks a good player but I can't see that being true.

Plus... You'd be spending big on a player to work under potentially a new manager. I don't see him as a Jose type player but could be wrong. Maybe they've already discussed with Jose?

Live the way these stories go around. One minute it's a done deal, the next it's lies but with the caveat that it's not done yet...