It was only a matter of time before this popped up. I do hope we can keep him, otherwise we would have trained him all this time just for another club to reap the rewards.

I'd like to think he wouldn't go to Real Madrid with him being a former Atletico player. Contracts don't necessarily mean anything now but hopefully get him signed up with us soon.

With only David de Gea and Michael Carrick in line for new contracts, the necessity to clear the decks will see several players leave next summer.
Click to expand...

I think it's only a tactic to get a good contract. He should not be heading out to Madrid if we are able to match the wages that he will be offered there. 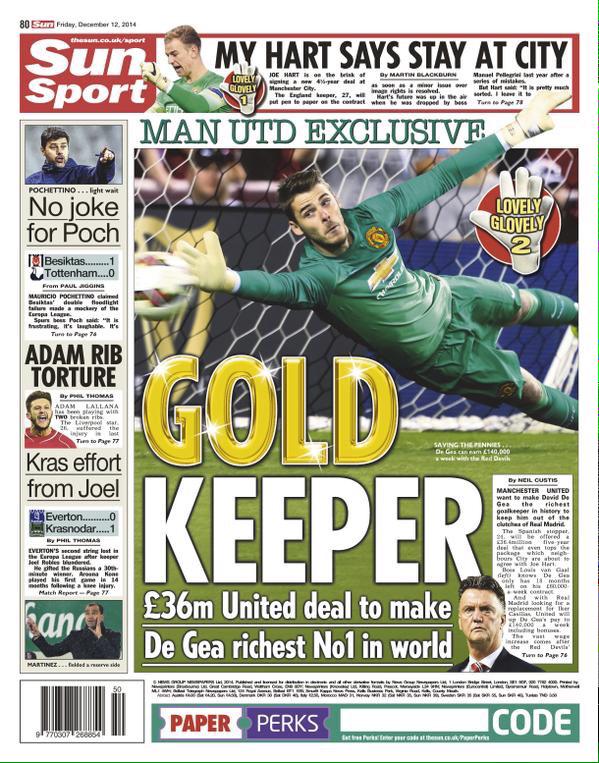 I hope a deal is done soon

Apparently, the author of the piece is close to Mendes.

The future goal of Madrid seems be linked to the name of David de Gea. The current goalkeeper of Manchester United is chosen by the white club to take over from Casillas. For weeks have begun contacts between Madrid and environment goalkeeper ahead of next season.

The goalkeeper Toledo believes that his time at Manchester has been completed and longs Spain and the League (despite conflicting reports emerged in the last few hours on renewal). In fact, whenever he can fail to travel to our country, as it did this week enjoying a few days of rest that had been granted Van Gaal. In the English club know the intentions of David de Gea. Therefore we have hedged its bets by hiring Valdés, who yesterday was presented as a new player of the 'Red Devils' until 2016 with an option of a further year. But besides the signing of exazulgrana, the United also is following closely Tim Krul, Dutch goalkeeper Newcastle would come to Old Trafford if De Gea eventually saturates in Madrid.

Indeed, Victor Valdes had words of praise which is his partner and demarcation: "De Gea is the best goalkeeper in the world".

Link. The contract with the United Madrid ends June 30, 2016 and Old Trafford know that if you do not pass the next summer, would go free next year (if not renewed). Hence will not put undue obstacles to its output. In England, even as they have money. According to the British press claims Manchester United has priced him at 30 million euros (eight more than he paid for Atletico in 2011). The arrival of David de Gea to Madrid would cover off Casillas, who after the final of the Champions came to an agreement with Florentino Perez to continue at the club this season and to go free on 30 June. Upon regaining ownership, the white captain (signed through 2017) has also regained some of its cache and not lack offers.

But De Gea not only take over from Casillas in Madrid. It also points to the team. In fact, Del Bosque has already appointed him as the natural replacement for Iker in goal for La Roja.
Click to expand...

There was a rumour going around yesterday that Mendes was stalling on De Gea contract until we make a decision on Falcao.

Few quotes emerging from LVG's presser that were embargoed.

I've resigned myself to him leaving. It's inevitable. A shame that we've built him up and Madrid will reap the rewards for years instead.

Daily Telegraph suggest that Real Madrid are going to wait until 2016 when they can sign him on a free.
Man Utd transfers: Real Madrid want to sign David de Gea for nothing - in 2016

A guy I know saw Dave at La Tasca in Trafford Centre last night, and said no deal is done, but is happy at Utd

He has one year left on his contract and I think that he will stay in Manchester. The player will decide, but he's happy there, at the moment.
Click to expand...

De Gea: "Everything that has been written in the press about us not getting on is a lie. We both want the best for the club and the team, and the stories are complete lies." 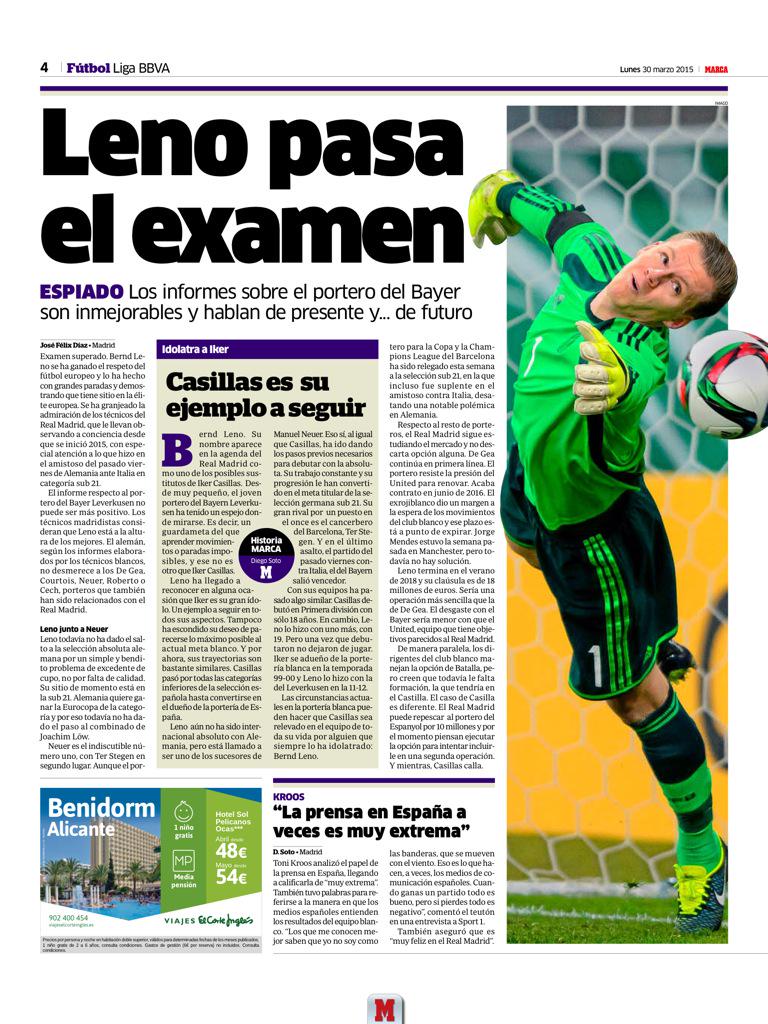 De Gea is the priority in June; if not, Cech is the alternative | English | AS.com

Apparently, Daniel Taylor has said on MUTV that Real are working on bringing De Gea to Madrid.

The 24-year-old is understood to have been offered in the region of £200,000 a week to stay at United, but Van Gaal admits that clubs are now at the whim of players and that all of the power is with De Gea.

“It takes a long time now,” Van Gaal said, when asked about efforts to secure De Gea to a new contract. “It can always happen, but I am not the boss.

“The player is the boss and he can say yes or no.

“I want him to stay, but you will have to ask David de Gea, not me. He has to sign, but we have offered him a lot of money.”
Click to expand...

That's disappointing. Judging by his reactions lately it did not look like he wanted to go anywhere

If he does go, and it is a big possibility, then we need to sign Hugo Loris of Spurs I think

macas said:
That's disappointing. Judging by his reactions lately it did not look like he wanted to go anywhere
Click to expand...

I think he'd like to stay for footballing reasons but personal reasons are maybe pushing him towards a move back home.

The Spain international is out of contract next summer but has yet to sign a new deal offered by the club.

Van Gaal said he does not know if the 24-year-old will stay, but said plans were in place should he leave.

"We have a list of goalkeepers who can replace him because we have to be organised always," the Dutchman said.

Contract negotiations with De Gea, who joined the Old Trafford club in 2011, were opened earlier this season, and Van Gaal recently confirmed the club had offered the player "a lot of money" to stay.

"We want him to stay and I hope he shall sign," Van Gaal said.

However, he stressed only De Gea could decide on his future: "You have three parties [involved] and the most important party is always the player.

Van Gaal has spent more than £150million on seven new players this season, and United's executive vice-chairman Ed Woodward has said the club will be "active" again this summer.

That has prompted speculation the club could move for Tottenham striker Harry Kane or Wales' Real Madrid winger Gareth Bale.

When asked about the pair, Van Gaal said: "I have seen that I buy everyone in the world but it's not like that."
Click to expand...