Next up is a CL match tomorrow against Young Boys.

I suspect there will be a few changes to freshen it up. I think Fred will probably play and Martial as well.

Will be interested to see our line up for this one, need to get a good start and get 3 points on the board but a bit of team rotation is inevitable.

Will a few of the lads who have played every game get a rest, or will Ole go nearly full strength ?

Can’t take these games to lightly Utd need 6 points off young boys not beating the weakest team home and away cost us last season.

Wankdorf. Thing of the sponsorship possibilities.

I don't think we're going to rotate too much as we need to get this off to a good start, and build some chemistry between our first choice 11, and Ole hasn't really been about the rotation too much.

Is Cavani available? Think he might start as Ole will want to get him up to speed.

Cruella ne Ville said:
I don't think we're going to rotate too much as we need to get this off to a good start, and build some chemistry between our first choice 11, and Ole hasn't really been about the rotation too much.

Is Cavani available? Think he might start as Ole will want to get him up to speed.
Click to expand...

Think Ole knows he has to rotate and with a much stronger squad now he’s got to use it.

Ole will want to get the 3 points in the bag early. I think we will see a largely full strength side. Maybe 1 or 2 different from Newcastle game, maybe Martial starts over Sancho, maybe Fred over Matic. Get up a few goals, give Sancho, Elanga, VDB time. Ole should be rotating more this season but I think it's really too early to expect big changes from the starting XI just yet.

I guess we just have to wait to see what Ronaldo has in the tank these days maybe they look to start him get the game won then hopefully take him off with 20 minutes to go. He doesn't exactly bomb around the pitch burning up loads of energy.

I expect it'll be 11 changes next week in the EFL cup game against West Ham so only expect a few tonight.

Can't see Matic starting two in a row so you imagine Fred comes back in.

I thought he might give Dalot a start as AWB's form hasn't been good to start the season.

I think Sancho should start, he needs game time. Martial on the left, Sancho on the right, Ronaldo as striker. Greenwood to replace Ronaldo with 20 minutes to go if things are going well.

I'd probably try and keep Ronaldo fresh for the league games but not only that try and get Greenwood meaningful minutes through the middle.

Though I expect Ole will want to not take any risk in the first 2 games as in the following 3 group games we play Liverpool, City and Chelsea the fixture after.

So important to have 6 on the board and be able to rest some players prior to those games. If you can split the difference with Atalanta after having 6 against Villarreal and Young Boys we should go through.

Can't see us taking 6 points off Villareal to be honest think we will do well to take 4 off them they've always been a tough team to play against and I don't think they've suffered any big losses over the summer so can see both games with them ending in a draw.

6 points off Young Boys is essential then target 6 points off the other 2 two teams should see us through I can't see us being unbeaten in the group stage I think in one of the away games we will slip up.

We have to show we've learned from last season blowing that group after winning the first two games was ridiculous hopefully with the new faces in that sort of complacency that we've seen in Europe is no longer a problem.

Utd are far from a proven quality side in Europe they can't balls this up again and end up in the Europa League it would be embarrasing for the club to have that happen again they need to be in the knockout rounds.

Young Boys are managed by former Huddersfield coach David Wagner who previously worked with Klopp and likes to play a similar style so Utd will need to be prepared for a hard working opponent that will look to pressure them on the ball.

Not far from the team I expected in all honesty, apart from the one selection in VDB, glad to see him get a start, just hope he shows what he is capable of.

Trying again. Starting lineup. I see now that IDFD posted the lineup but I thought that was a prediction. At any rate, I hope VDB takes his chance. He needs a good game but also we need him to inspire some confidence so the manager can use him and rotate the squad more. Interesting to see Lindelof on artificial pitch, expect a lot of bouncy crosses. Also hope Sancho has a stormer. 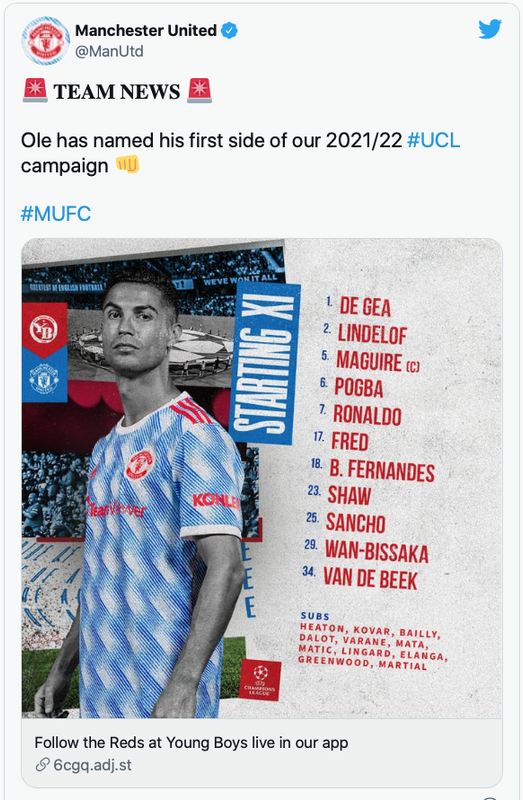 Big chance for VDB he needs to show what he can do assume he will start in a midfield 2 with Pogba on the left.

Didn’t realise we were on the artificial pitch either.

They’ll be a handy side they are used to winning especially on there own patch so Utd need to be on it straight from the start.

This football lark is easy when you've got Bruno and Ronaldo.

And people said they can’t play together.

Ronaldo just knows where the chances are that is what our young lads need to learn get in those positions and there’s easy goals to be had.

Well can have no complaints with that red

Poor touch then flying into the opponent he’s been poor.

Our players are really struggling to control the ball on this surface.
R

I've seen some on the BBC feed try to suggest that's not a red card. Personally I think it is. He's lost control of the ball and he's gone over the ball of the ball to try and regain possession. It isn't malicious but it is a little reckless.

Radio saying not a red

Before the replay I thought it was harsh. On the replay thought yeah deserved to walk. It's not malicious but it is reckless and he's made a lot of contact.
R

IDFD said:
Before the replay I thought it was harsh. On the replay thought yeah deserved to walk. It's not malicious but it is reckless and he's made a lot of contact.
Click to expand...

Yeah exactly. Don't get me wrong the defender has made a meal of it but in today's football that happens on every tackle.

I’d say red he’s over the ball straight into the ankle at force.

Think Ole needs to make some brave subs at half time.

Radio changed its mind too.

Awful from AWB, he’s got to be more savvy than that, especially in Europe. We’re gonna be under some pressure in the second half. Varane for Lindelof and Matic for VDB after 15 min with a view to putting Greenwood on for Fred and moving Pogba back if we need a goal.
R

This is probably more evidence that actually AWB really isn't good enough. I mean he's just not progressed from when they signed him really.

AWB is like this sides Fletcher. Gets a lot of flak isn't no where near as bad as people make out.

Otherwise don't like wasting that sub taking Donny off for Varane.

Don’t mind 5 at the back in this situation. Just hope we’re not going to sit back and try to defend for 45 min.

EDIT: So long as Shaw and Dalot become wingbacks going forward and attack.

Vital that one of those midfield 3 gets up to Ronaldo when we do get the ball.

Cruella ne Ville said:
Don’t mind 5 at the back in this situation. Just hope we’re not going to sit back and try to defend for 45 min.

EDIT: So long as Shaw and Dalot become wingbacks going forward and attack.
Click to expand...

Think that has to be the plan sit deep and invite them on and hope to snatch a second on the break won’t be pretty but just need to get the job done.

I think he will need to get some fresh legs on for Ronaldo and maybe Bruno soon as it will be a lot of running without seeing much of the ball.

Does he risk Lingard in midfield or go super safe with Matic.

Was a long time coming. And we need to make an attacking sub.

They haven’t deserved it