Was part of the under 17 squad for the recent Slovakia trip. Only turned 13 in August which shows how highly he must be thought of. His father was a Potuguese footballer who played for a number of different clubs and has represented Potugals under 21's, he spent the latter part of his career playing for small clubs in Manchester so I presume that's how United came to sign Angel Gomes.

Gomes has been playing ahead of his age group for a while now apparently. There was an under 15's tournament held in Ireland a few months ago and onlookers were raving about Gomes, saying he was the standout player, despite being only 12 at the time.

13 is obviously far too young to be bigging up a player, but playing in an under 17's tournament having just turned 13 cannot be ignored.

Gomes impressed in his cameo against MFK Ruzomberok. I liked his passing. Incredible he's only 13.

Class at passing but can't tackle
B

The people that cannot tackle by and large should not need to. They need to just stay on their feet as much as possible and jockey them. His passing looked sensational.

Tackling not important and at 13 perhaps not strong enough to win tackles against boys older than him.

Signed a two year deal with the club. 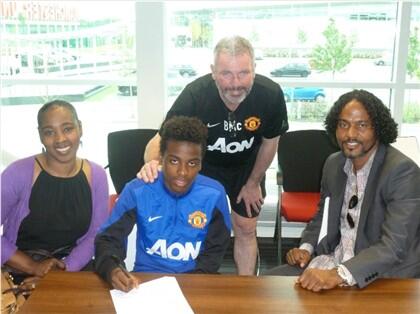 The little clips I have seen of him look very promising. How old is he now?

Tell me about it!
B

Just noticed there was a Gomes on the bench for the U18s against Blackburn. Assume that would be Angel. Is he about 14 now?

boothstownred said:
Just noticed there was a gomes on the bench for this game. Assume that would be angel. Is he about 14 now
Click to expand...

Was listed on bench but played for U16s today. He's been called up for Portugal U18s!
B

He certainly seems a good prospect

He did play for the U16's today and they got beat 3-0, I saw two of the goals and they were very sloppy

Has Gomes impressed you in the bits you've seen of him, manc?

IrishManc. said:
Has Gomes impressed you in the bits you've seen of him, manc?
Click to expand...

I'll be honest, I havent seen anything of him, not even watched any clips. Have heard people talking about him, and the general opinion is that he has a lots of potential.

I dont normally see players until they play for U18's

Named player of the tournament at MTU Hallencup.

Based on the videos in the MTU Hallencup thread - http://www.stretfordendarising.com/forum/f15/mtu-hallencup-2014-a-7633/, it's clear he's got immense natural ability. Significently though it looks like he has a really good appetite for football, never stops running and has a real will to win. That was also apparent from his cameo above against MFK Ruzomberok.

Great quality for a young player to have, Rooney had it in abundance from a young age and it lead to very little fazing him as he progressed, as the eargerness and will to play and win took over from the anxieties young players generally would have when coming through. Hopefully the same applies to Gomes as he progresses.

14 year old Angel Gomes played for United's under 18s in a friendly against Rochdale this week.

Nani and Gomes are apparently cousins. No idea if true.

Apparently scored a very nice goal for the under 18's yesterday against Derby. MUTV showing highlights at 5.30 this evening.

Superb goal, looks so small compared to the others. Not seen him play to be honest but got to be good to already be playing at this level. Not long turned 15 has he?

He's been 15 since the end of August so for around 3 months, crazy. I watched the highlights of the game, he could have scored 4 goals. Had a couple of long range curling efforts similar to the goal that went just wide and also performed a pirouette in the box to clear two defenders but he snatched at the effort. Look forward to seeing more of him.

On the bench v Brazil.