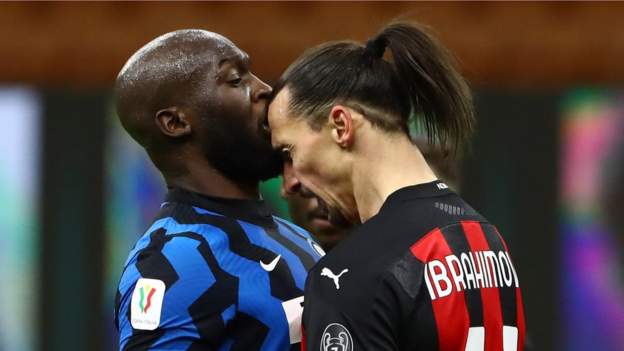 Zlatan Ibrahimovic denies using racist language in his clash with Romelu Lukaku in the Milan derby on Tuesday night.

Loads of video's online of this one boiling over and with the touchline microphones you can hear the back and forths.

Fair to say these two don't like each other.

It's a shame they were dragged apart would have been an interesting fight.

The racism claims for calling him a donkey need to do one. He's called him a donkey because of his first touch. How's donkey even a racist term?

Lukaku shouldn't be saying he's going to be f*cking Ibra's wife. Lukaku references Ibra saying something about his Mum. But I haven't seen what Ibra actually said. The voodoo stuff was previously in the media too regarding Lukaku.

But more importantly they're both grown adults and this was pathetic.

However i'd expect Ibrahimovic to absolutely murder Lukaku in a fight. Isn't he quite far long in several different fighting disciplines.

I do love the fact the first touch thing is something Ibra said in an interview before. Thought they were just made up memes.

Didn't really see who started it just saw the clips of them going at it as the teams went off at half time.

Seemed like heat of the moment stuff didn't really see it as racist and Lukaku would have reacted in a very different way if he thought any of it was racist as he doesn't back down from that sort of stuff. It was a lot of mouthing off and "hold me back" antics from the pair of them.

Was there any bad blood reported between them when they were both here? It was only 6 months most of which Zlatan was injured before he went off to MLS but don't recall them falling out.

The racist claims are because he said why don't you go and do your voodoo sh;t. But he said after this was related to Lukaku getting witch doctor advice about his move to United

From what I've read Zlatan was in his ear all half then he snapped.

It's all about Lukaku saying a new king is in town after scoring a winner in a derby. When Zlatan scored a winner in the next he said something about a god being in town. Pathetic really.

He did say he once offered Lukaku some money for every ball he controlled with his first touch at United, Lukaku didn't take him up

Black belt Zlatan would just thumb squeeze he’s eyes balls in seconds fight over , he’s not a racist calling him a donkey and I think Lukakus attitude is discussing Zlatan in his head rent free.

SIR-ALEX-FERGIE said:
he’s not a racist calling him a donkey
Click to expand...

It was the claim all over twitter. But seems to have died down which is good. Pogba has come to Zlatans defence.

The Voodoo doctor stuff was a rumour started by an exec at Everton that got into the press I think Lukaku actually took the guy to court about it but Zlatan was obviously using it to rile Lukaku as any sort of gossip or rumour about you will be flund about in that context.

If Lukaku felt he was being racially abused he'd have had no problem going and reporting it to the ref as he's done before so I think this is people wanting to read into something that just isn't there.

Where it really went off was Zlatan has obviously said something about his mum and at that point Lukaku really flips and shouts back something about Zlatan and his wife.

I mean if it actually came to a fight you have to back Zlatan given he's actually trained in martial arts.

IDFD said:
It was the claim all over twitter. But seems to have died down which is good. Pogba has come to Zlatans defence.

The claim was re: the Voodoo comment, not the donkey comment, was the point I was making.

Yeah and I was clarifying that it wasn't the case. They were saying on twitter that the donkey comment was racist too.

At first it was the donkey thing everyone jumped on. Then when people were like that isn't racist they jumped on the voodoo crap. Which Ibra cleared up to.

As JSP said though if Lukaku thought Ibra was being racist it would have been a different reaction.

oh right, when I first commented on the voodoo thing, there was no talk on this thread of twitter, just a BBC report and then you said calling someone a donkey isn't racist. It looked like you'd picked that out of the BBC report.

It wasn't mentioned about twitter, I don't have it so i don't know what goes on on there.

And yes, neither are racist as far as I can tell. I'm not surprised Pogba defended Zlatan, he doesn't like Lukaku

Classic Ibra. An explanation then a further twist of the knife. Well done!