Where next for England? 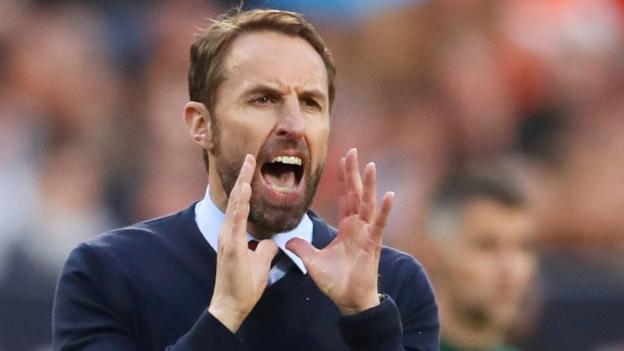 Why England will need a Plan B next summer - Chris Waddle

Gareth Southgate is right to play possession football but England will need a back-up plan if things go wrong against the top teams, says Chris Waddle.

Having watched the recent games it's hard not to be impressed by just how much more comfortable England are on the ball now that we were 3 years ago when we were dumped out of the Euro by Iceland but you do wonder if England need to evolve the system a bit.

We have a very quick and skilful front 3, very attacking full backs, 2 reasonable comfortable centre backs on the ball but where we are struggling is in the midfield we don't have guys who dictate the game currently and retain possession in big games.

This is where the team needs to massively improve over the next 12 months I think Southgate will look to bring some new midfielders into the setup who may be more comfortable in taking the ball from the defence and turning. Rice has already come in it may be that players like Delph and Dier are moved aside for the likes of Maddison and possibly even Foden. England need a trio of midfielders who can rotate to come and get the ball off the defence because if we don't work this bit out then we probably need to look to be a bit more like Liverpool in the bigger games and be more direct not dumping the ball long but asking the centre backs to go long at times to hit spaces for the quick forward to exploit.

Finishing 3rd is alright it's been a hell of a 12 months for the national team but the next challenge is can we get to a final to do that we are going to have to beat a strong team at some point which still seems the hurdle we haven't quite got over in a tournament.
R

jsp said:
where we are struggling is in the midfield we don't have guys who dictate
Click to expand...

But I think that's down to lack of options? I mean who can he bring in? Maddison I guess is one but we are limited.

We can definitely beat the big teams though. We tore Spain a new one for the first 45 minutes last time we played them.

I think Gareth’s subs were strange for Holland one. Kane simply isn’t fit and he’s let his team mates down in both the champions league and nations league by saying otherwise. Everyone can see he’s not to player he is currently.

Central midfield is definitely our weak point at the moment but we only have ourselves to blame about not beating Holland. Two very simple mistakes were made and at that level they’re both criminal.

Lingard was very unlucky to have his winner chalked off and I hope the offside rules change with VAR. This big toe being offside malarkey is too marginal.

RichH2016 said:
But I think that's down to lack of options? I mean who can he bring in? Maddison I guess is one but we are limited.
Click to expand...

This next lot of the young players to come up from U21 certainly have the ability to do it they just need a manager that can coach them the art of doing it and install them with the confidence to do it.

The key is when you play a 3 in midfield you have to rotate so a different player goes into to get the ball watch City it isn't every pass that goes to Fernandinho sometimes one of the more attacking players drops and Fernandinho moves forward so the opposition are forced to drop off as they can't decide to stay or go. Carrick described playing Barca as like being on a Carousel the 3 in midfield constantly swapped roles so you never knew which one to pick up and eventually you make a mistake one gets free and it's curtains.

You have to trust your technique as you will have to take the ball under pressure and keep it and know your escape routes when the ball is coming to you the Spanish lads are masters at this they turn so effortlessly on the ball to escape danger.
You must log in or register to reply here.