Sean Goss was signed from Exeter City for an undisclosed fee in the summer of 2012.

The midfielder, a boyhood United fan, impressed sufficiently as a guest player during the Ageon Future Cup in Amsterdam to earn a contract - despite being unfortunate enough to miss the penalty in the shoot-out defeat to hosts Ajax in the final.

A neat and skilful performer, he will look to press for a place in a congested area within Paul McGuinness' squad after scoring 13 times for Exeter's Centre of Excellence side in his final season.

Goss had been with the Grecians since he was eight years old but is adapting to life in Manchester and will aim to make his mark in 2013/2014 for the Under-18 team.
Click to expand...

Exciting talent from the little I’ve seen. He has quick feet and the quality of his passing is very good. He also appears to be an intelligent footballer with awareness and vision. His physique is ideal for a young midfielder.

Thought he was good yesterday. Cool on the ball, sweet left foot with good vision. Scored a good goal and has a good physique for a central midfield player.

Like the look of all 3 of our CM's at this level (Harrop, Goss and Willock). Rothwell and Pearson in the year above too.

JSNFRMN_MUFC said:
Like the look of all 3 of our CM's at this level (Harrop, Goss and Willock). Rothwell and Pearson in the year above too.
Click to expand...

Spot on mate, they are all very good players for us

Thought he and Willock were excellent again on Saturday. Hopefully the Boro game is on MUTV at the weekend.

Hope so too with it being away, but the only thing I can see on the schedule is on Sunday at 8.30pm for highlights

How does Goss rate among other centre midfielders we've had at this level in years gone by? Pearson, Rothwell, even Pogba etc..? 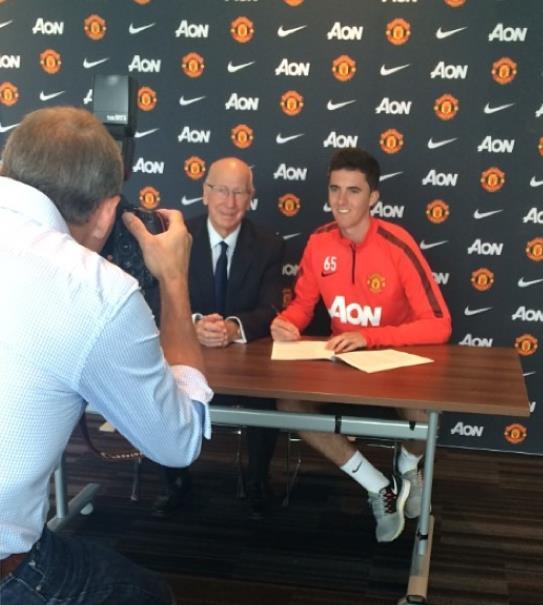 Interesting that he's been taken on tour. Like Blackett last year, may have benefitted from being left footed because a few right footed players seemingly ahead of him in the queue at U21 level.

From what I've seen of him he looks like he has a very good passing range but like Norwood before him it's hard to gauge whether he'd be able to exert that on a higher pressure game than underage level so it will be interesting to see how he fares.

Think he set up the goal for the Reserves yesterday.

Apparently slipped back in to a back 3 when we went down to 10 men. Missed the game. Sounds like Mitchell is doing really well as a wing back.

A little surprised at a permanent move. I don't think he would make it at United but he is one of the few from the u23 with a small chance.

Linked with a move to QPR.

Looks like it's going to happen. Good luck to him. Contract up in the summer, needs to play now. Very good signing for QPR, wouldn't be surprised to see him in the Prem one day.

Good player, I'm sure he will have a good career. Reminded me of Oliver Norwood in ways - great passing range but the question is whether he could have the same influence on a quicker paced game than an underage match. Only one way to find out and that is by playing. The Championship is a good base for him and like Jason, I wouldn't be surprised if he played Premier League football in the near future.
Share:
Facebook Twitter Reddit WhatsApp Email Share Link