He's been out of work for a while since leaving Valencia and it seems a bit of a bit of a left field shout but I can see why he'd be up for giving it a go.

England have got a good Womens side at the moment and the game is growing and becoming more high profile so if he did well it could be a route for him into the mens game and being an international job it leaves him time to do his punditry and other interests.

Got the job then straight away someone goes and finds some tweets from 2012 where he's made a sexist joke on twitter, welcome to 2018!!! I don't think it's that bad what he's said it's clearly a tongue in cheek reaction to someone who commented on an original tweet but as is the case now it's all aboard the shocked and outraged bandwagon. Just because you're offended doesn't mean your right is a lesson a lot of people online could do with learning

He's also getting slated for getting the job because of his lack of experience but people are ignoring the fact that the FA's shortlist of 3 all turned down the job and the coach of the Chelsea ladies team who was also discussed as a candidate is taking a break from the game to have a child.

I mean rather than attack Neville who has taken a massive gamble for his own career by transferring from mens to womens football even if it is a high profile job within the womens game.

Personally I think it would be better for the ladies team to be coached by a lady because they don't get opportunities in the mens game so they need a chance to prove themselves but this creates a problem do the FA appoint the best possible person they can find or do they appoint someone based on their gender?

What was wrong with giving to the stand in coach?

I'm not sure he should have got it. Would he even be interviewed for the mens team?

Haha I absolutely love twitter! You can't do anything these days, the fact he has had to apologise, get a grip, they were all tongue and cheek but it did make me laugh this morning on way to work.

Get back in the kitchen and let the men play the football haha go on Phil!

Mr C said:
What was wrong with giving to the stand in coach?

I'm not sure he should have got it. Would he even be interviewed for the mens team?
Click to expand...

Was the issue that the stand in coach didn't have her pro license yet? They wanted the new manager to have their pro license already it was a minimum requirement for applicants as part of the vetting/audit process so to appoint her to the position might be tricky as technically there's public money and interest in the position so you need to be able to audit the decision making process to stop the "jobs for the boys" culture taking over.

Well obviously not for the mens team given it's a job where the barrier for entry is much higher they will want someonewith a pro license, managerial experience plus other things to even make the short list. When you hire someone even at the FA you need to set a benchmark criteria to sort through the candidates and Phil Neville wouldn't get through that process. Rightly or wrongly the standard required for the womens team is lower possibly to alllow more females to apply as very few females have the pro license.

I think it's a bit of a strange decision but it seems he's being cast as a flop or a failure before he's even taken a training session. His CV isn't terrible he's been a first team coach at Man Utd & Valencia plus for a short period he was an assistant manager at Valencia with his brother so it's not like they've just given it to a guy who's just retired and hasn't got any experience of the other side of the game.

An international manager needs to be a good coach as you've got to get your message across quickly with players who don't train together every single day it's totally different to club management. 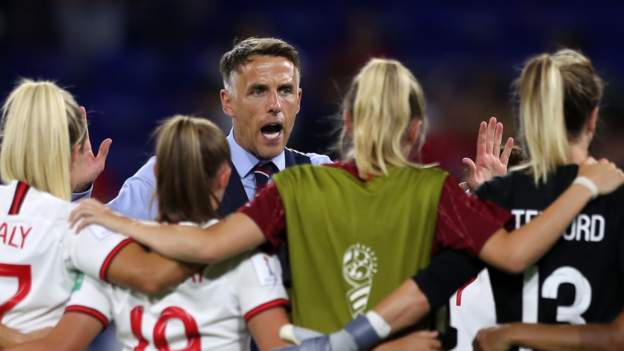 Phil Neville leaves his role as manager of England's women and takes over at Major League Soccer side Inter Miami.

He's officially left after an ok spell in charge wasn't really able to take the Women's team on to the next step and looks like he's off to join his buddy Becks as the manager at Inter Miami.

For a man not making much of an impact he certainly gets given plenty of opportunities.

I'm surprised Beckham has done this, imagine having to sack your mate

Not sure how much control Becks has as he doesn't own it out right he's part of a group that owns the club but he's clearly hooked his mate up with the job. Seems an odd move for Neville who's bounced around a few roles and maybe hasn't yet found his calling in the game.

It is odd as both are also co-owners at Salford City but not sure how close to the day to day running Beckham is of that club.

Will be interesting to see how he does, his coaching CV doesn’t scream success. IM are a new team as well so needs to integrate to a fairly new setup.

I think we can safely say it will be a disaster. He doesn't strike me as being a very good coach.

Mr C said:
I think we can safely say it will be a disaster. He doesn't strike me as being a very good coach.
Click to expand...

Yeah he doesn’t seem like the type that could fire you up.

He’s only had one job as manager in international football which is hard so be interesting to see how he does with time with the players.

6 defeats in a row lost 5-0 at home last night to top of the league they are bottom of their conference 8 points from 12 games.

Fair to say it is not going well for young Phillip.

No relegation in MLS so doesn't really matter if you finish bottom.