Back to Barca seems to be the talk but the talk is Griezmann is a done deal just can’t be announced until his buyout drops on 1st July so where is the money going to come from.

Saw a mad rumour that Barca are prepared to offer Dembele & Coutinho in exchange for Neymar.

Bet PSG can’t wait to see the back of him unreal talent but not worth the hassle and for them hasn’t been there when they’ve needed him because of injury.

I feel an exchange of players would be the best option for Barca if they are spending £100m on Griezmann or how ever much it maybe. I think Coutinho and Dembele for Neymar would be a good deal to be honest. Neymar is a little punk and they will be well shot of him. The crazy fee they paid for him and would want coupled with his monster wages would be tough for people to meet. No doubting his talent but sheesh he has a closet full of baggage!

Not sure bringing Neymar back is the best idea they probably feel that their dressing room can keep him in line because he isn't the big dog in the yard he knows he isn't calling all the shots.

You could argue that his peak years might be behind him he's started picking up some bad injuries over the last 2 years he's a small guy and he takes a lot of heavy hits because of the way he plays the game you wonder how much longer his body can take that punishment.

Barca are desperate to win the CL so it feels like currently they're really chucking the kitchen sink at it trying to get another one over the line while they still have Messi on the books that Madrid 3 in a row probably hurt them quite badly as they're dominating domestically but they keep blowing it in Europe.

He'd have to take a pay cut to go back to Barca there's no way they can take his wages on along with Griezmann even with a clear out their wage bill is already massively out of control.

The PSG chairman has come out in the last few days saying the superstar behaviour has to stop and won't be tolerated anymore both Neymar and Mbappe have made some public comments recently that haven't gone down well with the owners. I can see why PSG want Neymar out the door he brings a lot of attention especially young fans who love watching him do all his flicks and tricks but he doesn't half bring trouble and they must be looking at it thinking we are still where we started in the CL with him. That is down to injury not him bottling it in some way but I think they must feel it's time to go down a different road without him.

Is there a possibility that the Griezmann deal hasn't been announced because they want Neymar and don't want them both? There is so much speculation it's impossible to say, Coutinho and Rakitic to united is one I read, which would mean Pogba to Madrid and Barca to announce Griezmann or Neymar or both.

I also wonder if Neymar might be better to Madrid. It's does like Neymar and Mbappe are clashing.

Mr C said:
Is there a possibility that the Griezmann deal hasn't been announced because they want Neymar and don't want them both? There is so much speculation it's impossible to say, Coutinho and Rakitic to united is one I read, which would mean Pogba to Madrid and Barca to announce Griezmann or Neymar or both.

From some of the reporting the Griezmann deal is done but because it's a buyout clause thing they can't deposit the money to confirm it all until the 1st July when the fee drops from 200m to 120m. Griezmann wouldn't have gone public as early as he did if there wasn't something already 100% in place as he'd look an absolute idiot if he ended up staying. Think one of the Atletico directors came out recently and said they've known since March that he was leaving and started planning for it.

The Rakatic story seems to be Utd are keen on him because they want an experienced midfielder and Barca would be open to selling but the player has no interest in making the move he wants to stay with Barca next season.

I don't see Madrid as an option for Neymar now they've kind of filled the spots he'd occupy already by bringing in Hazard it feels like it's back to Barca or nothing for Neymar it feels like Madrid may have moved beyond the Neymar stuff now same with Utd at a point in time they were prepared to pay big money for him but I think the way things have gone at PSG will have put them off. I can't see Zidane or Solskjear wanting that sort of personality in the dressing room as both of them are managers who want to build teams not build around one superstar. 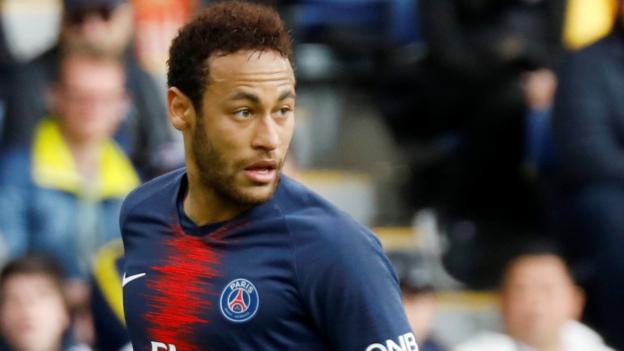 Paris St-Germain sporting director Leonardo says "Neymar can leave PSG, if there is an offer that suits everyone".

So grateful we dodged the bullet on this absolute weapon.

He's been nothing short of a disgrace at that club and we dodged a massive bullet with him I can't believe Barca are willing to have him back.

Apparently Leonardo is willing to let him go but doubt he will go as no-one could afford him surely. Sounds like Barca are struggling to put together the money for Griezmann so it seems like PSG are going to have to put up with his nonsense. That’s what happens when you buy a douche bag.

His team say he has an agreed absence for his charity work until the 15th July. PSG say they know nothing of it.

Sounds like Barca want to do the deal but like you say they're strapped for cash my guess is they'll try and do a straight swap Countino for Neymar or maybe it'll be Coutinho plus a squad player they want to offload. The Barca president said the other day they want to keep Dembele but that wage bill is looking awfully stacked and how do you fit Griezmann, Neymar, Suarez and Messi into the same team?

Neymar agreed terms with Madrid in Feb, Madrid agreed to match his PSG salary.
Neymar then called Messi and asked him to speak to the Barca directors about coming back to Barca which Messi wants, Neymar has actually agreed to reduce his wages to go back to Barca.

PSG are happy to sell but would prefer to sell to Madrid as they have a terrible relationship with Barca over the Neymar deal and they don't want Neymar to get what he wants.

Barca's directors don't really want to bring him back it's Messi who is pushing the issue as he's friends with Neymar and what Messi wants Messi normally gets at that club.

Neither Barca or Madrid currently can afford to do the deal because they will be in breach of salary cap restrictions which apparently are a thing in La Liga so for either club to do the deal they need existing high earners to leave something both clubs are currently struggling with.

I mean all of the above could be nonsense but I don't really see why either club is bothered about bringing him back great talent but what an absolute head ache he is for clubs.

Sounds like he's staying put the clubs can't agree terms so he's got to stay for another year.

I wonder if he'll get another mystery injury around February and disappear when they actually need him again this year?