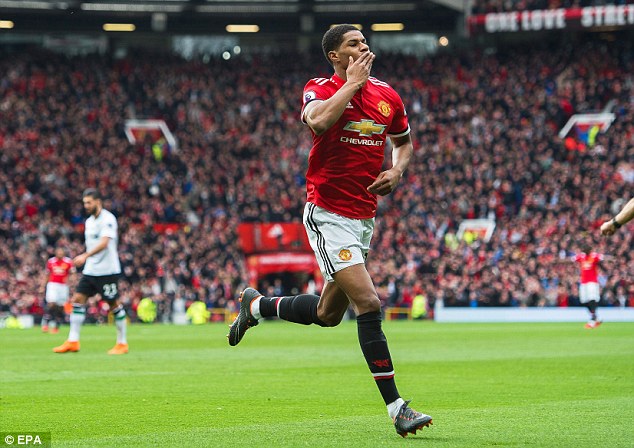 I think Rashford will struggle to play as a striker in a Mourinho team. He should play as a left winger.

Struggled last night but think getting games in the middle is good for his long term development but I agree right now it feels like he needs to be a wide player would be nice if he could learn to play from the right as that is where the gap is but I don’t think it would suit him.

Didn’t influence the game really. Looks better from wide as has been put above

Can’t expect too much from him with the little training he’s had so far. Thought he was the better of the front 3 players despite the other 2 having full pre seasons.

I still think all the forwards would be better off playing in a 2 with Lukaku being the constant figure upfront. But it’s quite clear that a 433 is preferred. While a 442 diamond or 352 would perhaps suit the current squad better.
B

I would personally go with 3-5-2. We don't have genuine wingers so this would get 2 men up front. Right wing back is a problem though. Of your present fullbacks probably young is the best bet. Could lingard do a job there short term?

boothstownred said:
I would personally go with 3-5-2. We don't have genuine wingers so this would get 2 men up front. Right wing back is a problem though. Of your present fullbacks probably young is the best bet. Could lingard do a job there short term?
Click to expand...

Think if we do that keep Darmian he’s a good wing back when he plays for Italy. Shaw, Young, Valencia, Dalot & Darmian gives you plenty of options but not one of them is a world class option.

3-5-2 solves a lot of problems but we’d need the wing backs to be super attacking and aggressive for 90 minutes and play high up. My worry is if we go 1-0 up playing that way it quickly becomes 5-3-2 and we are just pumping it at Lukaku’s head as that is the Mourinho style we go 1-0 up and sit off regardless of what formation we play.

Lukaku & Sanchez up top could be a very nice partnership.
B

Yeah I can see the drawbacks too

I want to see us stick to a 4-3-3. In a 3-5-2 Rashford and Martial will get no minutes at all. They’d go from fighting with Mata and Lingard for the one position to fighting with Lukaku and Sanchez who regardless of how they’re playing are Mourinho’s boys and won’t be dropped.
B

To be fair it isn't about getting minutes on the pitch for any players. It's about getting the right formation for the players you have got.

It’s about the best system to suit the squad you’ve forgot to maximise results on the pitch and hopefully entertain the fans in the process.

3-5-2 I think suits a lot of our problems but not sure if it would lead to better results and performances.

If we were going to switch now isn’t the time to do it as I don’t think we have the specialist wing backs on either side and we don’t really have time to perfect it in training although we do have 2 weeks now with the entire squad before internationals/Europe kick in. This is the period for tactical work.

To me 4-3-3 leaves us one problem position where we don’t have a single specialist which is RF whereas 3-5-2 creates 2 RWB & LWB.

Personally I’d prefer a 442 diamond to the 352. I’m not saying do it next game or even in the league. We should stick to what we have been doing, as has been said it’s too early to go looking to change, it may improve, some players have only just started training so team cohesion may improve. But I’d really like to see a strike partnership tried probably in the League Cup. I think we need to look at solutions to our attacking problems as it’s not working playing with those wide men. I’d like to see Pereira at 6, Fred and Herrera flanking with Pogba further forward. Rashford and Lukaku up top. Back four from Friday with Dalot in for Darmian. Won’t happen but I’d love to see that in the League Cup 3rd round.

Gonna have to get Football Manager in November to see how that works out. Haha

Basically we've got no wingers so come up with a system that means we don't need to play wingers but to do that you need either wing backs or full backs who can get forward and provide width not totally sure we've got them either.
B

No wingers and no attacking fullbacks and all we seemed bothered about were centre halfs.

We needed min 5 new players for this season, lb, cb, rb, rm/rw and the cm we got. We could have possibly done without the cb.

Jose has to get more out of this squad by changing his tactics. Simple.

boothstownred said:
No wingers and no attacking fullbacks and all we seemed bothered about were centre halfs.
Click to expand...

True but that position also needed improving this summer wasn't about increasing the number of players it was about getting rid of as many of the 6/10 average players as possible and replacing them with quality that just didn't happen mainly because those 6/10 average players have got no intention of leaving.

I'd have been happy if the squad size reduced this summer if it meant some of the mediocre players were moved on.

I do think there might be a way to make the 4-3-3 system work bit like the Rooney/Ronaldo/Tevez system where you don't really have fixed positions and it can change around and be fluid could be the way forward but for that to work we've got to be better in possession.

Leicester had more of the ball than us Friday that should never happen at Old Trafford I don't care how early we score Utd should always dominate the ball at home against mid/lower table opposition I know we were looking for counter attacks but really we shouldn't be resorting to that at 1-0 that should be the pick them off for number 3 or 4 the plan A should be getting us 2 ahead at home to these teams.

What's a realistic target for Rashford this season?

He should be aiming for 12 league goals 18 in all comps at least.

If he gets over 15in all comps I'd be surprised. When he gets a chance I'm not thinking, this is in. He's very hit and miss.
B

I would be surprised if he gets more than 10 goals.

He got 11 two years ago. 13 last season. Why’s he suddenly regressing?
B

Personally I think he is regressing. I am seeing him running down lots of blind alleys and not great end product. He will also have minimal game time I imagine.

I think 15-20 in all comps has to be the target for him although a lot will depend on the number of starts he gets as I see his role probably as an impact sub but if he's starting every game you wan 20-25 in all comps from a wide forward.

I don't think he's refressing but I'd say he's maybe not improving at the rate some had hoped but he's only 20 not everyone is the finished product straight away some take a bit more time.

He needs to get a little bit more finesse to his game but like jsp said he’s only 20. I think he has lots of little tricks and obviously pace to burn but in tight areas he needs to improve in his ball retention and passing. Also needless to say his finishing needs to improve ten fold, when he doesn’t have time to think he’s very good but in a 1 on 1 situation I have no confidence he’ll score.

I don’t think he’s regressing but defenders work you out and you have to keep evolving. That’s his challenge now and he’s got so much talent that I think he’ll continue to get better and better. 15-20 would be his aim and I think he can get there.

As a player with pace to burn, like @SuperRash says, I'd be wanting him on that right wing, using that pace and whipping balls in for Lukaku. This servers double purpose, it fills the right sided problem and gives Lukaku service which we don't currently give him much of. I just can't see why one of Sanchez, Martial or Rashford have been played there for any length of time, rather than all 3 being used on the left.

I'd like to see Rashford get a go on the right nice little 5 game run playing the same front 3 from the start every week see if we can get something going and him and Sanchez can swap if needs be Lukaku can come out wide for a bit as well try and make it a bit fluid.

I think that only happens if Martial leaves which is unlikely. If he stays Mourinho has to rotate to keep squad players happy because he's got to many players. He can probably get away with using Mata & Lingard from the bench for a few games.

It's going to be similar at the back it's why I think he's found it hard to pick the same XI every week as he's spoilt for choice and players aren't making the decision for him by being consistently good to the point where you dare not rotate them.

He had every reason to be angry, but headbutting Bardsley was the worst reaction possible. Stupid and immature. The club should fine him for letting down the team in such a shameful way.

These are lessons every player learns and it was only a matter of time before he took the bait from one of these players just needs to learn to leave it to the ref and not react.

What I found on the internet:

If a player is sent off for a professional foul (eg holding an opponent back when they’re through on goal) or a second bookable offence they will be handed a one-match ban.

He’s made an apology to the club team mates and fans for losing his and and unprofessional behaviour on Insta. Lingard responsed saying dont worry brother all part of your learning process.

Will be 3 games as it is violent conduct same thing Richarlison got for doing same thing.

Big chance for Martial in his absence.

jsp said:
Big chance for Martial in his absence.
Click to expand...

Heard that one many times before...

Not a Utd game but played well for England last night in a front 2 grabbing a goal.

Only saw the highlights but got himself in plenty of scoring opportunities and should have scored more wasted a great one vs one chance.

Could it be that the games he needs to play to develop as a centre forward come with the national team rather than Utd?

Even if we play a front 2 he wouldn’t start ahead of Lukaku & Sanchez because they’re more consistent but I’d love to see him play up top with Lukaku when we play 2 up top.

He missed quite a few chances though. Much like Lukaku he needs to become more clinical. One of the balls Lingard played through to him was delightful though. Those two are on a good wavelength when playing through the middle together