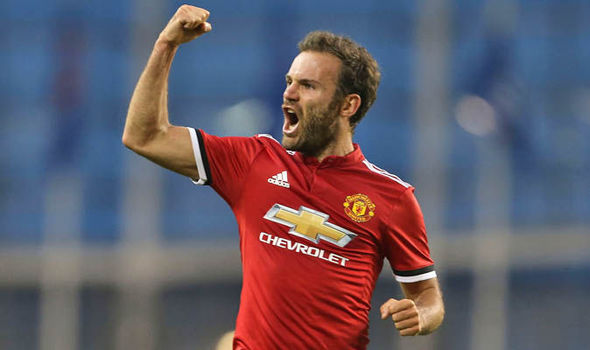 Apparently Mata started the game, did play 45 minutes and was taken off at half time. I was surprised at that cos I don't remember seeing him whatsoever.
Another one that went missing!

As much as I like him, he needs shipping out.

Shouldn't be starting games especially on the right of a front 3 but again problem position not solved so another season of square pegs in round holes.

Unless we change formation he really doesn't have a role in this team and given he's down to 12 months on his deal he is a player who should have been told to move on this summer but he clearly either doesn't want to leave or the club can't get serious offers for him.

I like Mata as a player but his signing was a mistake when it was made it was a panic buy as we didn't need him but by now he should've been moved on.

It's utterly ridiculous Mata on the right, you might as well put Shaw there!! Mata has no legs and we need a pacy player there. Is it just me or is the the obvious solution be to put Sanchez right for a run of games?

The obvious solution is to put Sanchez there but for some reason we wont. Now I just want us to pick a starting 11 stick to it and see what the hell happens. Ideally for me that would be last nights back 5 with Dalot coming in when fit lets build that back 5 ready to play together full of potential but they wont reach it if they don't play. Matic in for Periera. Sanchez Lukaku Rashford up top. Let them build some chemistry.

Mata Martial and Herrera wont be here come July next year. We've no need to keep them as happy as possible.

That's the starting 11 and plays as often as possible with a few rotations being made no wholesale changes.

I actually thought it would be good to have Young rb as he would offer something going forward and stick some crosses in, but he cant do that when Mata made no effort to cover him due to laziness or no legs or both!

The obvious solution is stop playing wingers since we don't have any and play a diamond and accept that the full backs have to adopt attacking positions to provide width and start higher up the pitch and force the team to press from the front but that's not a traditional Mourinho style of place.

This way you could put Mata central in behind 2 strikers like Lukaku & Sanchez where he might be able to create an opening and he'd also give Pogba/Fred someone to pass to when they receive the ball in midfield.

I'm at the point where sticking any of our lads on the wing feels a waste of time as none of them really want to be there as none of them like the tracking back part of the role even Sanchez.

We played with Rashford and Martial yesterday, both full of pace. No service. Martial got the ball once in the first half and roasted the defender.
Too many passes going astray in midfield, probably becasue they were worried about teh defence so didn't want to get too far forward and went for the pass, wrong decisions.

we could play like that easily, but the defence is not good enough to be isolated at times.

One of his best performances in a red shirt absolute class second half.

The man's a class act.

Do we need to go to a 4-2-3-1. Today proved Pogba can play deep. It might not get the best out of him but it would allow us to set up

I certainly think we can at home but he’s clearly worried about exposing that defence but protecting it doesn’t seem to help much either so why not go for it.
B

We protect it by keeping the ball.

One of his better performances for United.

I thought he was comfortably man of the match. 2 great performances back to back

Would be nice to see him get a run in the side.

Not many better than him at those free kicks right on the edge of the box.

One of very few who can get it over the wall and back down with precision and speed that close to goal.

Got that ball up and down in such a short distance. Quality

Mata was the only one for me who should of taken that, brilliant free kick taker from close range.

He's always been good at them from that range.

Can often drift out of games and struggles with the speed of counter attacks but provides moment of real beauty like the build up to the second goal but also an over the shoulder volley full width of the pitch straight onto Shaw’s foot.

I missed most of the game. I see he has come in for criticism for his performance. Is the criticism fair or harsh?

I missed most of the game. I see he has come in for criticism for his performance. Is the criticism fair or harsh?
Click to expand...

I'd say harsh he wasn't great but then no one was and I think moving him back into midfield made a big difference.

He doesn't really fit the front 3 anymore under Ole because he can't move quickly enough but he's still very neat and tidy plus he sees the pass quickly.

I'd let him move on in the summer unless he's willing to take a squad player salary as I think he could go and not need to be replaced and it creates a space for a guy like Chong to get chances from the youth team. I think it's time for him to go back to Spain where the play is a bit slower and his qualities will shine through.
R

The time has come for Mata to be moved on so I hope that he is! He's a fantastic player but he just doesn't suit or fit in with the United style.

He'd make a great ambassador for the club when he's retired

In 10 years time do you think he'll be remembered as a Man Utd player or a Chelsea player?

I always think of a player like Torres as a Liverpool player even though he spent longer at Chelsea.

Does need to move on, think he's out of contract, been offered a one year deal but that might be us just trying to get money for him to reinvest. The right side of attack is an area we needed to strengthen last summer but there's arguably bigger priorities now having pretty much wasted last summer's window with disagreements between manager and board. His place in the squad will likely just go to Chong and Gomes.

There's about 8 players we should cut from the senior squad for various reasons and the jury is still out on a few others. Outside our first choice 11, there's not many proper first team squad members beyond that 11 that are good enough and/or that fit the way we wish to play now, unless we're dumb enough to hire another backwards manager.

Mata was certainly more important for Chelsea but think he'll be remembered msot for playing for the bigger of the 2 clubs, just like Torres.

I think there's just not a spot for him in the squad anymore he'd be a real luxury like Fellaini was and I think we need to let him move on as for new players to come in some players need to go out and I think he needs to be one that is allowed to move on.

If we felt we could sign him up for 2 years and sell him either next January or next summer then maybe you could give him a deal but I'm not really sure where he'd end up going.

For the club it's a shame that they don't recover any of the fee they paid but they got 5 1/2 good years out of him and I think the way he's behaved in his time here he should be allowed to leave on a free if he gets a good offer.

For me he’s the nicest guy in football. His charity is fantastic and he’s vastly under rated as a player. He’s a United player through and through and that goal at Anfield will rightfully have him remembered. I have a canvas of that up in my bedroom.

Red Sky Canvas are amazing by the way. I’ve got 3 in my house. Old Trafford at night. Ole’s finish and the Mata one.

I would prefer to see the likes of Gomes and Greenwood get game time ahead of Mata.