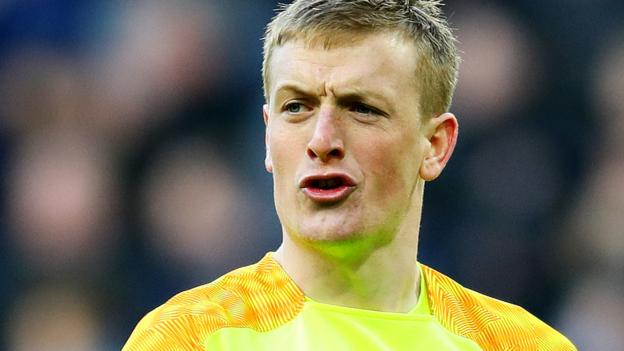 England squad: Should Jordan Pickford's spot be under threat?

After an erratic performance on Saturday and an inconsistent season, could Jordan Pickford face losing his England number one shirt?

People forget quickly that going into the World Cup he wasn't the nailed on number 1 the position was very much up for grabs and he took it but he's been very shaky this season as the stats show.

Really he's not actually under much pressure for his spot with Butland in the Championship this season there isn't really a PL rival knocking at his door and even then the fact he's comfortable on the ball makes him attractive to Southgate and the way he wants to play.

For me the best all round English keeper is Tom Heaton but his weakness would be distribution which is Pickford's strength and something Southgate wants to so it's unlikely that he's going to lose his spot in the team.

I guess the real threat to him will be from Angus Gunn who's now got himself in the Southampton team and is involved at U21 level if he stays in the prem with them next season and does well Pickford could come under pressure.

Overall I think the best keeper in England is marginally Butland but the problem is that he’s in the Championship now. I do agree about Heaton though, he’s probably the best in the EPL at the moment. I also liked the look of Nick Pope but there is high competition in the goalkeeping stakes over at Burnley.

I think for what Pickford has done in the past I think he deserves to be kept as number one but he needs to buck up his ideas but saying that there is no real goalkeeper knocking the door down to get his place.

I don't ever see Butland play so can't really judge him never been that impressed by him when he was in the Prem looked to me like a Rob Green solid keeper but nothing really stand out.

That's what I never really got at Burnley why did they sign Hart when they had Pope and Heaton who are both better keepers I know both were injured at the start of the season but Heaton only missed the very start.
You must log in or register to reply here.